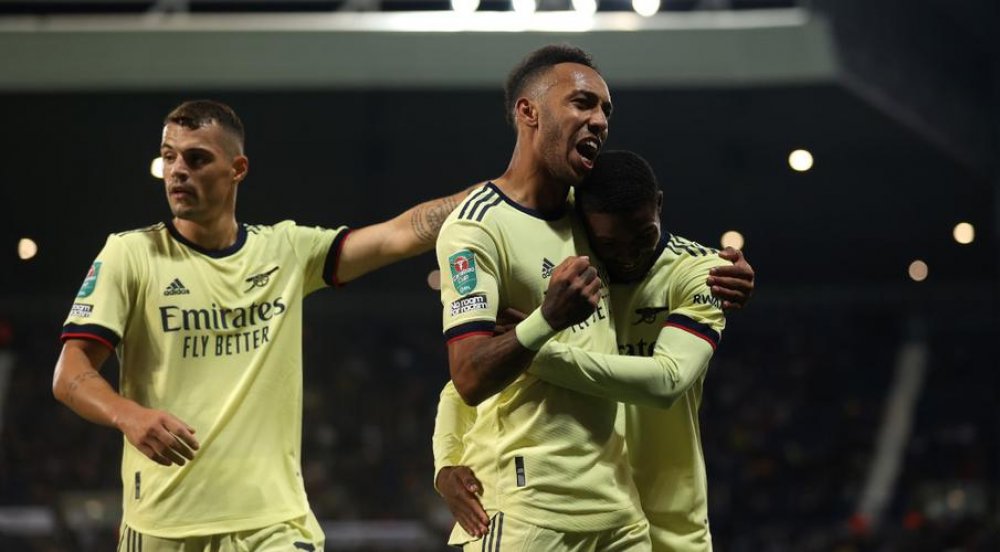 Gabon striker, Pierre-Emerick Aubameyang hit a hat-trick to lift the gloom around troubled Arsenal in a 6-0 rout of West Bromwich Albion in the League Cup second round on Wednesday.

Beaten by Brentford and Chelsea in their first two Premier League games, Arsenal arrived at the Hawthorns in turmoil after their worst ever start to a season.

Mikel Arteta's side were booed off following Sunday's 2-0 home defeat against Chelsea, with a group of supporters surrounding the Arsenal manager's car and chanting for him to quit as he drove away from the stadium.

Against that miserable backdrop, Arteta could not afford a defeat against Championship promotion chasers West Brom, who rested their entire first team and fielded a side with seven debutants.

Fortunately for Arteta, Aubameyang was able to make his first start this season after recovering from the coronavirus.

The Gabon forward completed his treble just after the hour and Alexandre Lacazette added the sixth.

"It was really good. To score six away from goal and keep a clean sheet, I'm very happy," said Arteta, whose side will host AFC Wimbledon in the third round.

"The attitude the team had from the beginning was good. We were disappointed not to win the two games in the league.

"When you lose the most important thing is to win the next match to get some confidence."

It won't buy Arteta much breathing space however as this weekend they face a daunting trip to Premier League champions Manchester City, where Arteta worked as Pep Guardiola's assistant before joining Arsenal.

Losing to City would pile more pressure on Arteta, who has pleaded with Arsenal's fans to back the team during a difficult period he describes as "unprecedented" in the club's history.

"We know what we will face on the weekend will be a different game," Arteta said.

"I don't know what will happen in the transfer window. A few days to go. Some exits are planned."

Amid reports former Inter Milan boss Antonio Conte is being lined up to replace Arteta if results don't improve in the next five games, he desperately needed a morale-boosting victory against Albion.

There was no lack of support for Arteta from Arsenal's sizeable support in the midlands and, for once, his players delivered as well.