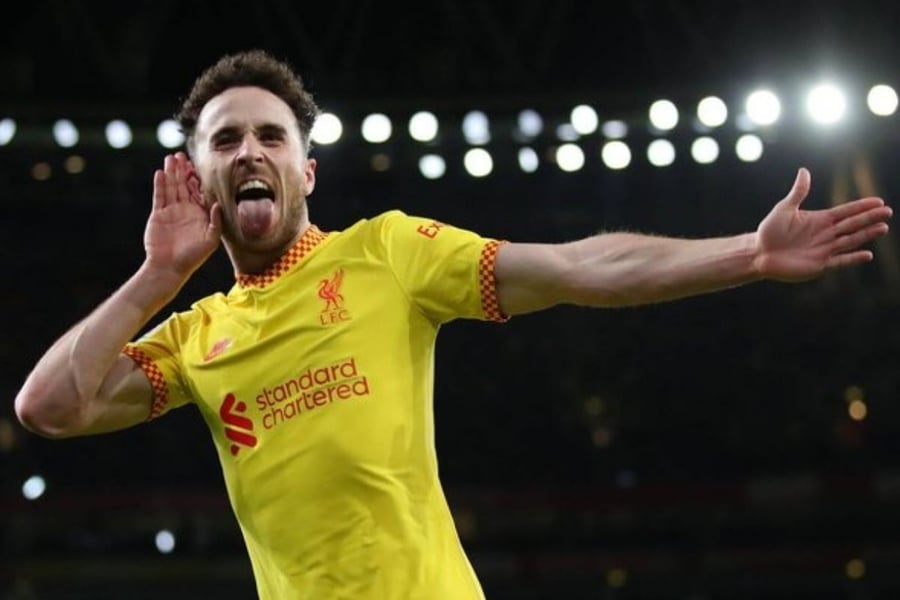 Portuguese forward Diogo Jota was decisive for Liverpool as he fired the team into the League Cup final against Chelsea with a double in Thursday's 2-0 win at Arsenal.

Jota put Liverpool on course for Wembley with a first-half strike and he clinched their berth with a late second goal in the semifinal second leg.

Klopp's side will face Chelsea in the final on 27 February; unlike the other meetings which ended in draws, this time there must be a winner.

Jota's 13th and 14th club goals this season underlined his value at a time when Liverpool are without Mohamed Salah and Sadio Mane due to the African Cup of Nations.

"We scored two wonderful goals, Diogo Jota is on fire. We were completely convinced when he arrived at the club he would help us massively," Klopp said of the former Wolves player.

"Since he is here he has made another step, he has turned into a really world-class striker."

The Reds, who last lifted the League Cup in 2012, are back in the final for the first time since 2016 as they aim to win the competition for a record ninth time.

It will be Klopp's fifth cup final with Liverpool since he took charge in 2015.

In the week that Liverpool's former chief executive Peter Robinson died aged 86, it was fitting the club returned to the final of a tournament they won four years in a row under his stewardship in the 1980s.

"The mood in the dressing room is over the moon. The boys were exceptional," Klopp said.

"First half, Arsenal started lively, then we calmed it down and played good football."

For Arsenal, it was a frustrating loss after they managed to grind out a 0-0 draw in last week's first leg at Anfield despite Granit Xhaka's red card.

Mikel Arteta's youthful side were exposed by battle-hardened opponents, emphasising the improvements still needed to revive the Gunners.

"We are really disappointed but we played against a top side. We had big moments in both halves and we have to score," Arteta said.

"We had chances and were pushing for the game but we have to convert if we were too beat a team like Liverpool."

Arsenal were unable to field a team when they successfully asked for last weekend's north London derby against Tottenham to be postponed.

But Arteta sent out close to a full strength side just days later as fit-again trio Takehiro Tomiyasu, Emile Smith Rowe and Martin Odegaard all returned.

Caoimhin Kelleher replaced Alisson Becker in goal for Liverpool and quickly repaid Klopp's faith with a superb save in the fifth minute.