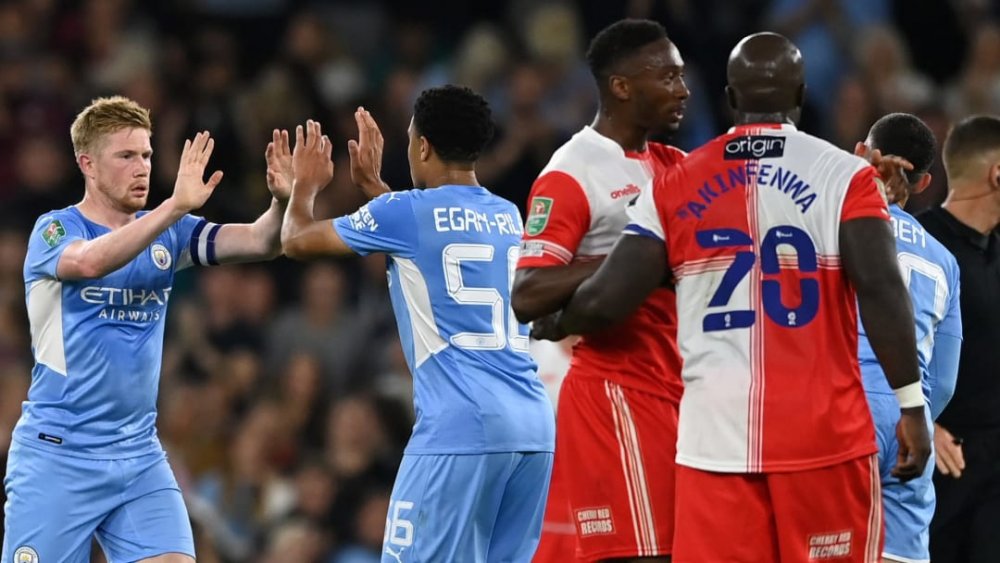 Everton and Watford were the major Premier League casualties in the third round, losing to QPR and Stoke respectively.

City will move past Liverpool onto a record nine League Cup triumphs if they take the trophy this term.

The holders made the perfect start to that mission as Pep Guardiola was rewarded for fielding a strong attack featuring Kevin De Bruyne, Phil Foden, Raheem Sterling, Ferran Torres and Riyad Mahrez at the Etihad Stadium.

City, who gave debuts to six academy graduates, were stunned in the 22nd minute as Brandon Hanlan tapped in his first-ever goal for third-tier Wycombe.

But Guardiola's men equalised seven minutes later when De Bruyne sprinted onto Foden's pass and slotted into the far corner for his first goal since May.

Mahrez fired City in front with a crisp finish two minutes before the break after good work from debutant Josh Wilson-Ebrand.

Torres got the fourth after 71 minutes with a close-range finish and Mahrez's tap-in and a first City goal for Cole Palmer capped the demolition.

"I just have to say thank you to the academy. They all do an incredible job," Guardiola said.

"I was lucky to grow up in Barcelona. Won the Champions League with seven players from the Barca academy. That is unique.

"Here, you have the feeling that we have not just one or two potential players but many of them. They have something special."

Liverpool had already won 3-0 at Carrow Road in the Premier League earlier this season and their reserves managed to repeat that scoreline.

Reds boss Jurgen Klopp made nine changes to the side which beat Crystal Palace on Saturday, with Kaide Gordon, 16, and fellow teenager Conor Bradley handed debuts.

Minamino, making his first appearance of the season after a thigh injury, fired them into a fourth minute lead as he drilled home from Divock Origi's header.