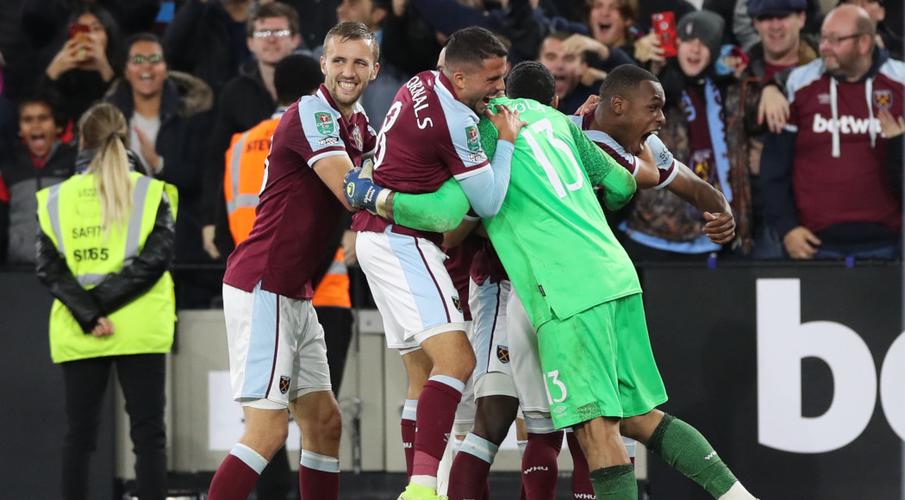 West Ham ended Manchester City's four-year monopoly reign on the League Cup on penalties on Wednesday as Liverpool and Tottenham booked their places in the quarterfinals.

City's record run in the competition came to an end at the London Stadium as the Hammers emerged 5-3 winners from a penalty shootout after both sides were guilty of missing plenty of chances in a 0-0 draw.

Phil Foden was the only man to miss from the spot as Mark Noble, Jarrod Bowen, Craig Dawson, Aaron Cresswell and Said Benrahma all found the net for David Moyes' men.

"Nothing is eternal," said City boss Pep Guardiola. "We fought a lot to win and win and win this competition.

"Four times in a row is a fantastic achievement and next season we come back to try and win it again."

Nathan Ake, John Stones, Ilkay Gundogan and Raheem Sterling all wasted big opportunities to extend City's 21-game unbeaten run in the competition as the scoreline belied a contest that raged from one end to the other.

Foden was thrown on along with Jack Grealish in an attempt to win the game from Guardiola.

But the England international pulled City's first penalty wide and stand-in goalkeeper Zack Steffen could not bail his teammate out despite getting a hand to Bowen and Benrahma's strikes.

Liverpool will now fancy their chances of winning the League Cup for the first time in nine years but had to overcome a poor start to win 2-0 at Preston.

The Reds had scored 30 goals in eight previous away games this season, but a much-changed side from Jurgen Klopp failed to hit the heights of Sunday's famous 5-0 win at Manchester United.