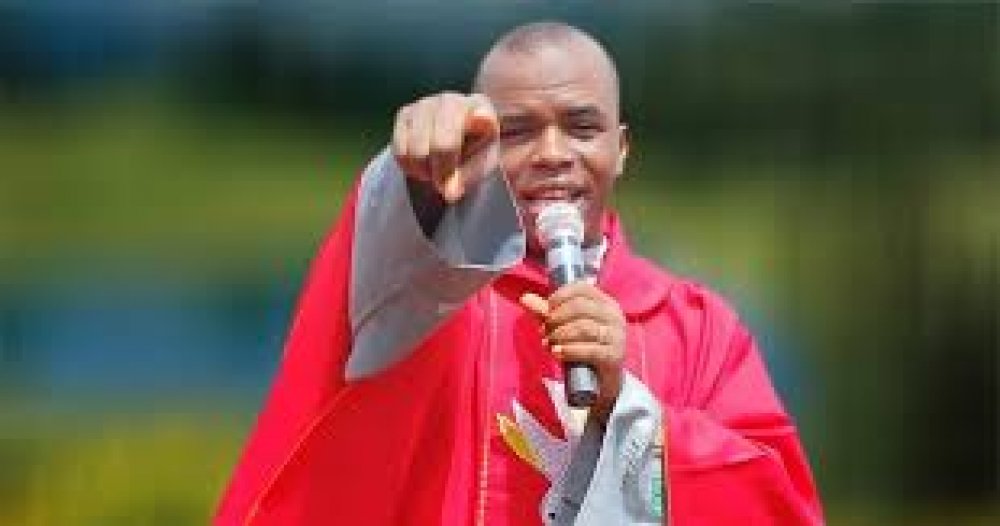 The Catholic Archbishop of Lagos, Adewale Martins, has revealed that the Spiritual Director of the Adoration Ministry, Enugu, Rev. Fr. Ejike Mbaka, could be banned from preaching if he continues to prevaricate from the doctrines of the Catholic Church.

Martins, who was appointed Archbishop of Lagos by the Pope in 2012, said this during an interview with the BBC Igbo while reacting to Mbaka’s prophecy that Hope Uzodinma would emerge as governor of Imo State.

Mbaka had earlier on New Year’s Eve prophesied that APC's Uzodinma would emerge as governor in 2020, a revelation which came to pass on Tuesday when the Supreme Court sacked Emeka Ihedioha and named Hope Uzodinma in his place as the duly elected governor.

Commenting on the issue which has caused a contentious debate, the archbishop said Mbaka was under the Diocese of Enugu and did not report to him.

He, however, said if Mbaka continues the controversies that have characterized him, the Catholic Church may have to bar him from ministering.

Martins said, “Fr. Mbaka falls under the authority of the Bishop of Enugu Diocese and therefore he has the responsibility of cautioning him. I can imagine that this must be giving the bishop some challenges.

“It must be giving him a bit of a headache and I feel sorry for him and I hope he will find some way of dealing with this matter that has been recurring. Of course, what could be done in the end is either to say, ok you receive the sanction of being stopped from public ministry. That is a possibility. If it is not done, there must be a reason.”

Martins, who was ordained a priest in 1983, said the Catholic Church is a politically neutral institution.

He added that even if Mbaka received a prophecy from God, he ought to ensure that his conduct corresponds with the scriptures and the doctrine of the Catholic Church.

The archbishop added, “It is utterly surprising that Fr Mbaka would go as far as naming one person as governor against another. It is embarrassing when you hear of priests or people in a position of authority making statements that are clearly partisan.

“The position of the Catholic Church on matters that have to do with politics is not to be partisan. Of course, we as a church cannot be oblivious to political events and happenings in the country or the world at large and therefore we must speak from the point of view of principles.

Martins said Mbaka’s behavior was at variance with the teachings of the Catholic Church and he had fallen below the standard expected of priests.

Mbaka, who was ordained a Catholic priest in 1995, has been known to give many controversial prophecies.

In 2002, he prophesied that the then Governor of Enugu State, Chimaroke Nnamani, would not return to office in the election but the governor won a second term.

He went a notch higher in 2015, prophesying that President Goodluck Jonathan would lose to the current President, Muhammadu Buhari, which came to pass.