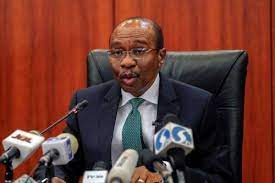 The Central Bank of Nigeria (CBN) has announced the introduction of the RT200 Programme which aims to stimulate non-oil exports with a $200 billion FX income target over the next three to five years.

Godwin Emefiele, the Governor of the Central Bank of Nigeria (CBN), announced the initiative this afternoon at the end of the Bankers' Committee meeting in Abuja.

According to Vanguard, CBN will fund the construction of dedicated non-oil export terminals under the program in collaboration with money deposit banks, in order to eliminate the delays currently experienced by exporters.

The initiative aims to address the foreign exchange inadequacies experienced in the country.

Over a ten-year period, it would also provide 5% loans to companies for value-addition and the production of finished goods for export, with a two-year moratorium.

Other important aspects of the program include the Non-Oil Commodities Expansion Facility, Non-Oil FX Rebate Scheme, and the Biannual Non-Oil Export Summit.

The governor agreed to accelerate the effort to encourage the production of finished raw cocoa paste into chocolate instead of just exporting raw cocoa.

He said that cashew processing, currently at a mere 5 percent of the nation’s production, as well as sesame seed processing, would be prioritized.