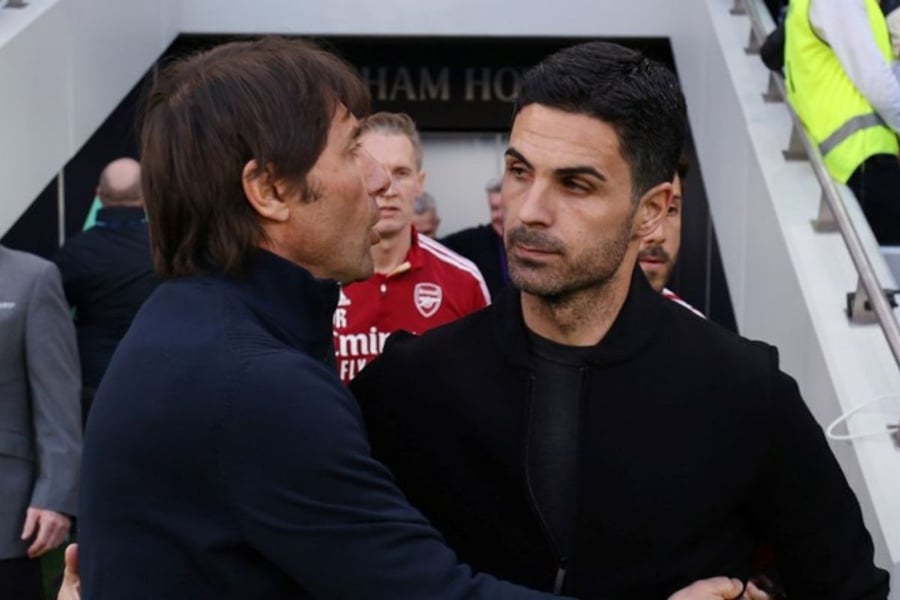 Antonio Conte 'takes a jab' at Mikel Arteta after the Arsenal boss criticised the referee following Tottenham Hotspur's 3-0 victory with a penalty and red card call.

Arteta was left fuming after referee Paul Tierney pointed to the spot in the 22nd minute - which Harry Kane converted - and then showed a second yellow (red card) to Rob Holding 11 minutes later for a foul on Son Heung-min.

"If I say what I think I am suspended for six months," said Arteta. "I don't know how to lie so I prefer not to say what I think... it's a shame because such a beautiful game was destroyed today."

Conte, whose team eased to victory on the back of a Kane double and a strike from Son, was unhappy with Arteta's assessment of the referee.

"Mikel Arteta is a really good coach. He's just started to do this job and I think that I hear him complain a lot. I think that he needs to be focused more on his team and not to complain," he said.

"The red card for me was clear. Don't forget against Liverpool I said nothing that happened with Fabinho."

Previous Clash Between The Duo

The Italian hinted that it was unfair that Arsenal were able to get the original fixture rearranged on the grounds of COVID-19 even though the squad had only a positive case.

"Arsenal were good to postpone a game in an incredible way with COVID-19 and they only had one player with COVID-19. I didn't forget this. If he wants to complain, we have a lot of possibilities to complain," said Conte.

Fourth-placed Arsenal, who lead Spurs by a point with two games remaining, travel to Newcastle United on Monday while Conte's side host Burnley a day earlier.