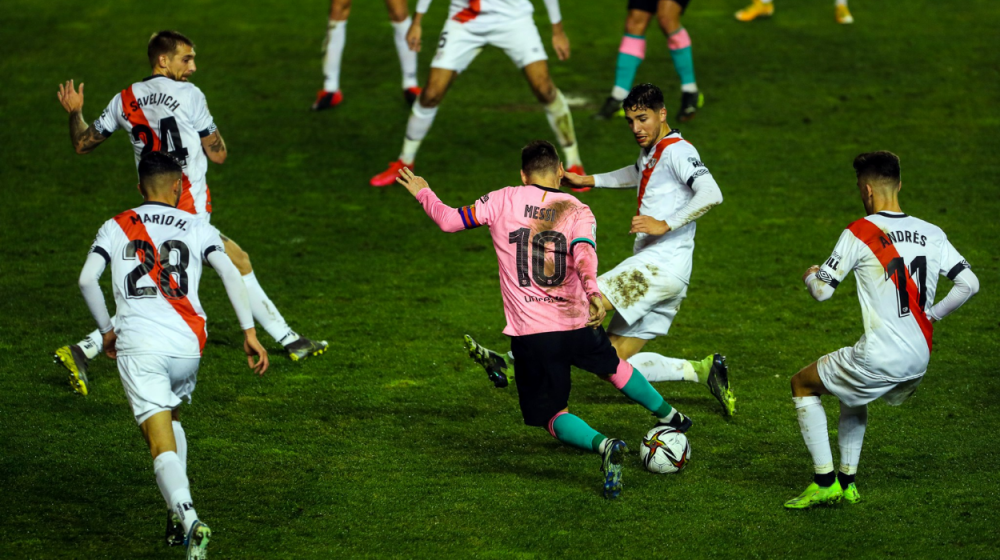 Barcelona's talisman Lionel Messi returned from suspension to inspire the Blaugrana to a 2-1 win away to Rayo Vallecano on Wednesday to reach the quarterfinals of the Copa del Rey.

Barca dominated the match and hit the woodwork three times but second division Rayo took a surprise lead in the 63rd minute when Barca keeper Neto failed to deal with a low cross and midfielder Fran Garcia pounced to bundle the ball over the line.

Rayo went looking for a second goal and were badly caught out on the break when Frenkie de Jong picked out Antoine Griezmann and the Frenchman laid the ball off for Messi to slot into the net from close range in the 70th minute.

The Argentine, who became Barca's record appearance maker in the competition with 76 Copa matches, was the architect of the second goal 10 minutes later, releasing Jordi Alba down the left wing with a sumptuous pass and De Jong finished off the defender's cross to send the Catalans into the last eight.

Lionel Messi has become the FC Barcelona player with the most appearances (76) in the history of the Copa del Rey. Surpassing Josep Samitier (75)

The Barcelona's skipper scored his 720th professional goal against Vallecano and set eyes on Ronaldo's 760 goals as they continue to play 'catch me if you can' in their incredible career.

Messi should have added a third goal in added time after waltzing his way through the Rayo defence, but when it came to shoot he lost his footing and could only find the side netting.

Barca coach Ronald Koeman talked before the game of his desire to win the Copa, with his team looking unlikely to catch runaway La Liga leaders Atletico Madrid, and he backed up his words by fielding a strong side.

The Dutchman took the surprise decision to start Messi and also fielded Sergio Busquets, Griezmann and De Jong, who was in a scorching form in an advanced midfield role.

But Barca, who have lifted the Copa del Rey a record 30 times, were still lacking something until Koeman made a triple change just after going behind, introducing Alba, Ousmane Dembele and teenager Pedri.

"We were excellent from the start and let them off the hook on various occasions, messing up the final pass," Koeman added.

"We then showed our character when we went behind and produced a lot of quality to score the two goals."