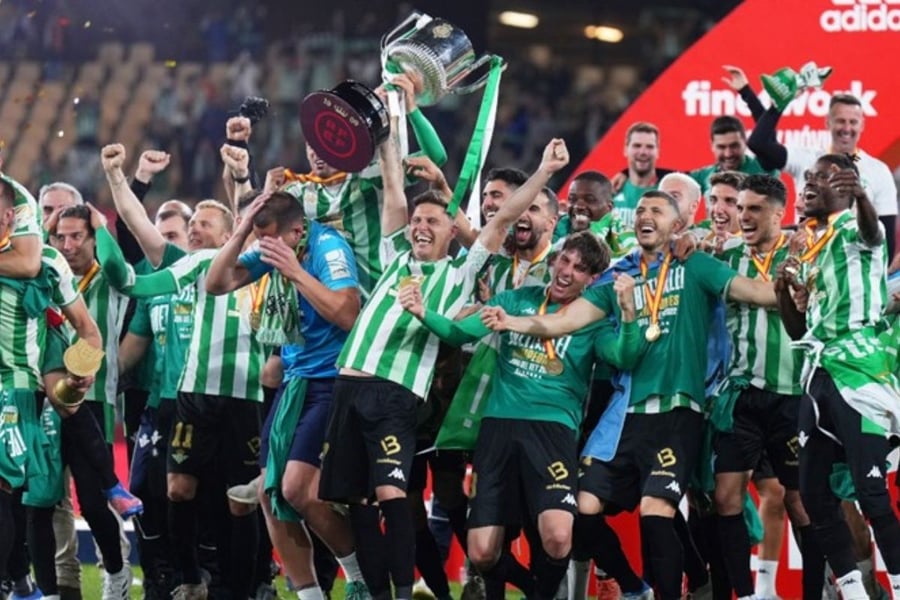 Real Betis won the Spanish Copa del Rey on Saturday, beating Valencia 5-4 on penalties in Seville after a thrilling final that finished 1-1 after extra time.

Valencia's Yunus Musah blazed over in the shootout, allowing Juan Miranda the chance to score the winning penalty at La Cartuja as Betis claimed their fourth major trophy in the club's 115-year history.

Borja Iglesias had headed Betis in front but Hugo Duro equalised for Valencia before halftime and neither side could find a winner, either in the second period or extra time.

But Musah's error and Miranda's cool head gave Betis the cup for a third time, following the club's two previous triumphs in 1977 and 2005.

Joaquin, the 40-year-old winger, who made his debut for Betis aged 19 in 2000 and played in the final 17 years ago, came on in the 86th minute and scored a penalty. It remains to be seen whether Joaquin decides this is a fitting end now to what has been a remarkable career.

Many had billed this as a clash of styles, with the swashbuckling style of Real Betis tasked with breaking down the grit and resilience of Valencia but in reality, both teams contributed equally to an open and enthralling final.

It was only the second in 14 years not to include any of Real Madrid, Barcelona or Atletico Madrid and while Betis and Valencia are hardly minnows in Spain, there was no doubting the weight of the occasion for both clubs.

Valencia won the Copa del Rey in 2019, beating Barca in the final, but a fire-sale of key players under the controversial ownership of Peter Lim means the team have been more concerned about relegation in recent seasons than winning trophies.

Betis, meanwhile, have spent three seasons in the second tier since they last won it in 2005, the same year they finished fourth in LaLiga, which they still hope to replicate this season but have never managed to repeat since.