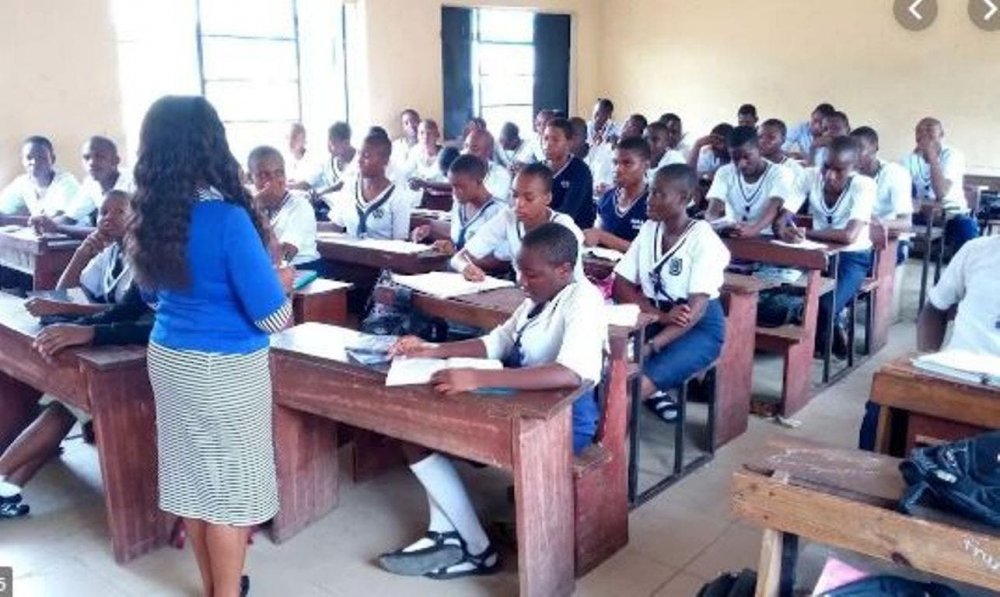 As academic activities resumed in the wake of the second wave of the COVID-19 pandemic, some schools in Nigeria have failed to comply with the safety protocols outlined by the Presidential Task Force on COVID-19.

While a school official was seen checking the temperature of the pupils with a digital thermometer as they arrive, the pupils were seen entering their various classes without washing their hands or having them sanitised.

Two Public schools in Kubwa in Bwari Area Council, while at the L.E.A Primary School Byazhin, teachers were seen with their masks on but only a few of the pupils came to school with theirs, The Punch correspondent in Abuja reported.

Also at the L.E.A Primary School Gbazango, it was a similar situation, only two out of over 15 pupils, who went in from the gate, wore a mask. Their hands were neither washed nor sanitised as they entered the school.

A male pupil, who tried to hang a banner on which the safety protocols were listed, pulled down his mask to his chin. The male guard who supervised him did not wear any.

A middle-aged woman who appeared to be a member of staff also entered the premises without wearing a mask or washing her hands.

Meanwhile, Private schools in the area] appeared to have put stricter measures in place for students and their parents.

For instance, Unique Rhema Nursery and Primary School, also in Gbazango, did not only make a mask compulsory for pupils, but water and soap were also provided for washing their hands as they entered the premises. Even the security men at the gates wore a mask while parents were disallowed from entering the premises.

According to the notice sent to parents by the school, management stated that parents should educate their wards on the pandemic and safety measures.

The notice read, “As our kids resume today, educate them with the following: Sit your kids down and talk to them about Covid. Introduce them to the use of sanitiser.

"Let them know that they can’t share their spoon, bowls, water, handkerchief, etc. Tell them to wear their mask when playing with their friends. Tell them their pencil, pen, eraser can’t be shared.

"Let them a bath as soon as they return from school and try to wash their uniform daily. Check their temperature always. Covid is real. The safety of our kids is our responsibility.”

At the school, most of the pupils were not wearing their face masks and there was nobody at the gate to ensure that the pupils came in maintaining the social distance guidelines.

Although the school provided water and soap in front of some classes, there was no temperature check for the pupils.

At the Community High School, Ibafo, some of the students were being delayed outside for not wearing face masks while the students scampered around to find where to buy one but there was no social distancing.

There was no provision for a temperature check and hand sanitisers at the school gate, there was also no provision of water and soap as at 8:30 am.

However, around 9 am when the Vice Principal of the school got to the premises, he ordered the students to bring out the buckets where they were being kept and filled them with water.

The Vice-Principal said, “As you can see, the situation is beyond our control, I’m just coming because of the traffic and since I was not around, there’s no way they could get the buckets.

” I’m not expecting the pupils to be as much as this even though the state government has not given us directives if we will be operating the system we did the last time where the junior pupils resumed 8-11 and the senior resumed 12-3.

“We’ll find a way of addressing the students to sensitise them on the use of face mask and hand sanitisers. Everything will be normalised before the day runs out.”

Some schools in Lagos State also maintained partial compliance with the COVID-19 protocols, Students at Ipaja Ayobo area of Lagos State are seen going to schools without a face mask and teachers allowed them in without following due protocols stated for covid-19.

Although, some students in Junior Secondary School 2 in some of the schools who were not supposed to be in school on Monday were seeing loitering at the school gate without their face masks.

However, the Lagos State Commissioner for Education, Folasade Adefisayo, visited some schools to monitor their compliance with COVID-19 protocols.

All the schools visited by the Commissioner had wash hand basins, infrared thermometers and the students in the classrooms used their face masks.

Adefisayo said a staggered school resumption was in place to forestall the spread of the virus.

Nursery, primary and secondary schools in states including Lagos, Ogun, Ebonyi and Nasarawa resume academic activities today for the second term of the 2020/21 academic year.

Resumption at basic schools was delayed in many states following the second wave of COVID-19 as well as the advice by the NCDC.