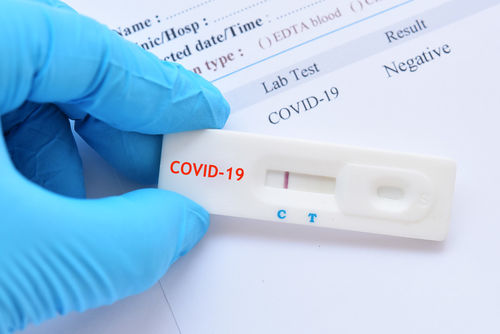 U.S. President Joe Biden says the federal government will purchase half a billion additional at-home rapid tests, with deliveries starting in January to the American public in the fight against Omicron variant.

Biden, in a statement from the White House, said the rapid tests would be delivered to Americans for free and that websites of where to get them delivered to their houses would be created.

“We have arranged for it to be easier for you to find a free COVID testing site near you on Google.

“Just enter “COVID test near me” in the Google search bar and you can find several different locations nearby where you can get tested.’’

But as COVID-19 once again rages across America via the new Omicron variant, the president said he will not discourage Christmas gatherings, impose vaccine mandates for domestic air travel or seek a new round of lockdowns.

“I know some Americans are wondering if you can safely celebrate the holidays with your family and friends – the answer is yes, you can, if you and those you celebrate with are vaccinated, particularly if you’ve gotten your booster shot,” he said.

The public should be “concerned” but not “panicked” about Omicron, he added.

“This is not March of 2020. Two hundred million people are vaccinated. We are prepared. We know more. We just have to stay focused.”

Federal health officials said on Monday that Omicron has raced ahead of other variants and is now the dominant version in the U.S., accounting for three in four new infections last week.

A sixfold increase in Omicron’s share of COVID-19 infections in just one week has led to long queues at testing sites in large cities. Biden announced new federal testing sites around the country.

The first will be created this week in New York, which just reported a record number of new daily cases.

He acknowledged that breakthrough cases are inevitable. “We’ll see some vaccinated people get COVID in potentially large numbers,” he said but noted that they are at very low risk of severe illness.

“Omicron is a serious, potentially deadly business for unvaccinated people. If you’re not fully vaccinated, you have good reason to be concerned. You’re at a high risk of getting sick.

And if you get sick, you’re likely to spread it to others, including friends and family, and the unvaccinated have a significantly higher risk of ending up in the hospital or even death.”

The unvaccinated have an obligation to themselves, their family and their country to get the shot, the president added. “I promise you, it saves lives, and I honest to God believe it’s your patriotic duty.”

He also urged parents to get their children vaccinated and said the government now has the knowledge and tools to keep schools open, even when Covid-19 cases are reported.

In his address from the state dining room, Biden said: “I got my booster shot and just the other day former president Trump announced he had gotten his booster shot.

“It may be one of the few things he and I agree on.”

The Omicron variant is spreading rapidly. According to the federal Centers for Disease Control and Prevention (CDC), Omicron is now the dominant variant of the COVID-19 in the U.S., making up 73 per cent of new infections last week.

CDC data revealed a nearly six-fold increase in Omicron’s share of infections in just one week.