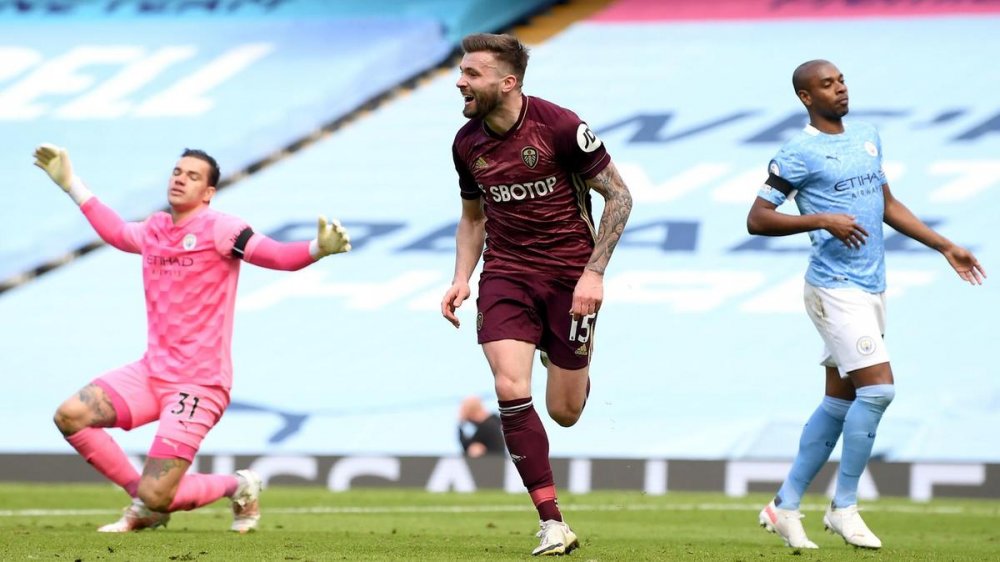 League leaders, Manchester City suffered just a fourth Premier League defeat of the season as 10-man Leeds United shocked the runaway leaders with Stuart Dallas's double in a 2-1 win at the Etihad on Saturday.

Leeds United secured their first three consecutive wins in the English top-flight for the first time in 18 years.

Dallas struck the winner in stoppage time despite Marcelo Bielsa's men playing the entire second half a man down after captain Liam Cooper's red card.

An unselfish play by Leeds' striker, Bamford as he squared Dallas instead of shooting, Ederson Moraes could not stop the right-footed strike from the Northern Irish man.

Just before the first half ended, the referee, Marriner after consulting with VAR gave Cooper a straight red for his tackle overturning his initial yellow card.

As Bielsa's captain walks off the pitch, the other players followed for their half time team talk.

Manchester City drew level on the stroke of 76th minute as Ferran Torres got a ball from Bernando Silva, and curled a right-footed shot into the bottom left corner.

The match seems to end with both teams sharing a point apiece but a lovely team play between Alioski and Dallas opened up City's defence and left Dallas with Ederson with a ball through the goalkeeper's legs to give the visitors the lead.

Leeds United got all three points at Etihad, moving up the table to 9th and City remain at the top of the table with 74 points, provisionally 14 points ahead of Manchester United.