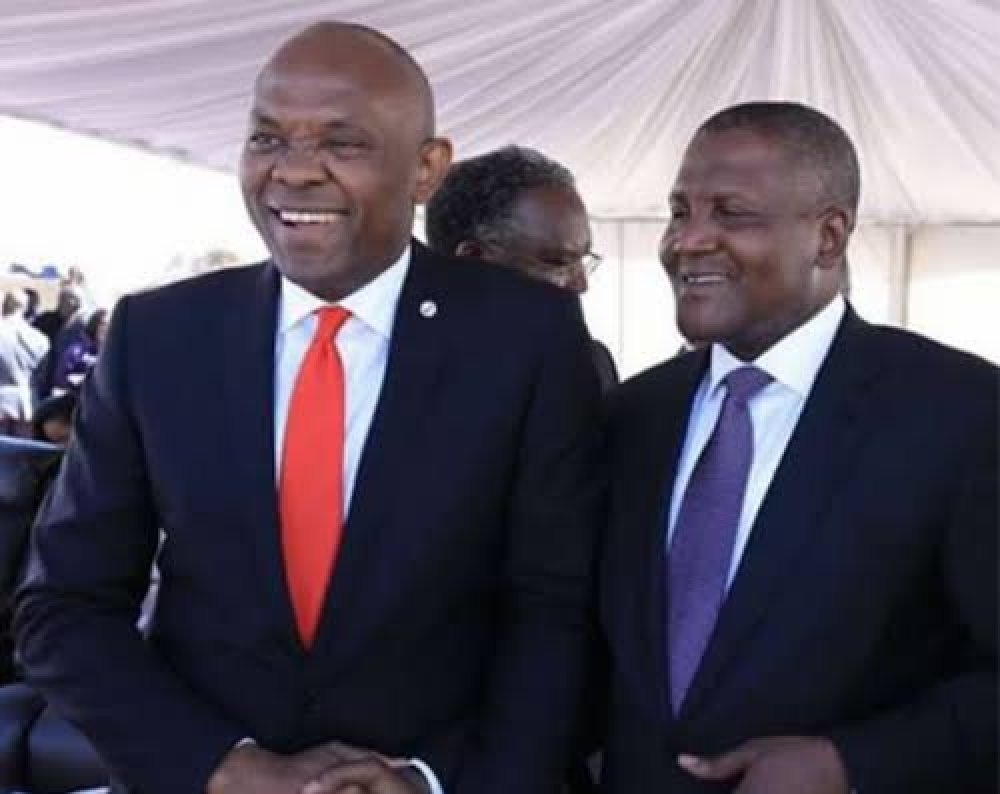 Dangote Group founder, Aliko Dangote, and UBA chairman, Tony Elumelu have been criticised for prioritising money above protest against police killings and harassment against Nigerians following the deaths of tens of youths in the hands of Police Unit, Special Anti-Robbery Squad (SARS).

Other top businessmen include Adesola Adeduntan and the Central Bank of Nigeria (CBN) governor, Godwin Emefiele, amongst others. The meeting was said to have held between Tuesday, October 12, 10:30 pm to the next day at 12:30am this morning.

Why Is Dangote, Elumelu and Adeduntan Got Involved?

Businesses are being affected by the two week-old protest, as ENDSARS protesters took their protest to major highways and road leading to airports in Lagos and Abuja to press their demand. Major roads are being blocked across Nigeria and this is affecting transportation of goods.

The protest has led to hours of traffic in some states, especially Lagos, where Nigeria's major port is located. Prior to the ENDSARS protest, Lagos road is known for being prone to traffic, as Dangote Group's salt and sugar company losses about NGN2 billion to Apapa gridlock monthly - this protest will only make it worse.

With the protest set to enter another weekend, the businessmen, CBN governor and about three governors requested that the protest be stopped, but the prominent individuals said the protest will go on as the youth were the ones who started the protest.

The protest had began since last week, with thousands taking to the street to protest and speak against the dreaded SARS operatives - they have been accused several times of stepping beyond their bounds and responsibility in order to extort youths, which in some cases leads to the death of youths.

In the last three years, the government had vowed to disband and overhaul the SARS unit, but the harassment and killing of youths by SARS operatives continued without government curtailing the illegal activities of SARS operatives as promised since 2017.

What Nigerians Are Saying About Dangote And Elumelu

The youths criticises Dangote and Elumelu for setting up a meeting and choosing to find ways to stop the protest because its affecting their business, but failed to speak against police brutality and killing of Nigerian youths by SARS.

A Twitterr influencer, Kelvin Odanz stated that, "Dangote is an enemy of this country. But we will talk about that after we #ENDSARS"

Filmmaker, simply known as @Hube95 said, "Tony Elumelu, Dangote they call una because their money is at stake you think they send una?"

Another twitter user, Omoniyi Israel, stated that, "Dangote and Elumelu are just concerned about how this movement is affecting their money, dem no actually send una papa. So let’s focus, #EndSWAT!" He added that, "Forget about any Zoom meeting! We got ourselves, let’s not lose focus! Our Leader is US! #EndSWAT"

Digital Creative simply known as @Oyimzy on TWitter said, "The likes of Tony Elumelu, Dangote and co. are just concerned because they are losing money. My brothers and sisters, please lets not lose focus amidst the violence and zoom meetings. #EndSWAT

"If dangote isn't part of the rot in the system why didn't he make any statement...a call from dangote to buhari would have averted all this mess, maybe jimoh and others killed won't have had to loose their lives, but now the protest is affecting his business now he cares."

According to a pharmacist simply known on Twitter as @Ms_ace_, she stated that, "UBA GROUP & DANGOTE GROUP ARE NOT LENDING THEIR SUPPORT. But their owners/ leaders are in meetings to stop this peaceful protest . What do we do about this ? #ENDSARSOPPRESSION."