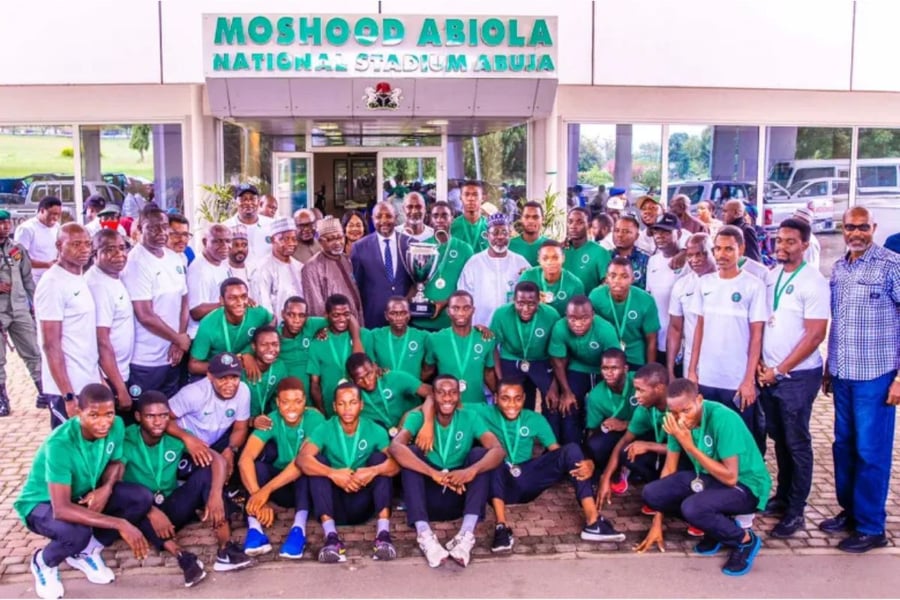 The Minister of Youth and Sports Development, Sunday Dare, on Tuesday, told the Golden Eaglets not to rest on their oars but to continue to work hard.

Dare, who hosted the team to a reception at the Moshood Abiola National Stadium in Abuja, said they needed to remain focused as they still have more ahead of them.

”You still have the task of qualifying for the 2023 FIFA Under-17 World Cup scheduled for Peru, and it is no mean task,” he told the regional champions.

The national under-17 male football team won the 2022 WAFU B Under-17 Tournament on June 18 when they defeated Burkina Faso 2-1 in the final match of the tournament held in Cape Coast, Ghana.

Success in Ghana meant they qualified for the Africa Under-17 Championship in Algeria next year.

While receiving the team, Dare told them that the work has only just begun.

“You must be prepared to work harder than you have done. The bigger ticket is to the World Cup in Peru in 2023.

“You have set the standards high and you cannot lower them. It will be good for you to become continental champions in Algeria next year and then prepare to face the bigger hurdle, which is in Peru.

“Let me repeat, that we are proud of you and we will continue to give you the necessary support that you will need. Stay humble, listen to your caches and work hard,” he said.

On his part, Ugbade thanked the Minister for the reception and added that he was hopeful that the team would begin training well ahead of time.

“This team you see did not have as much training as expected, but we were able to do our best at the WAFU B and won the tournament.

“I appeal that we begin the campaign for Algeria early, so that by the time we get to Algeria, Nigerians will see something totally different from what they have witnessed in Ghana,” he added.