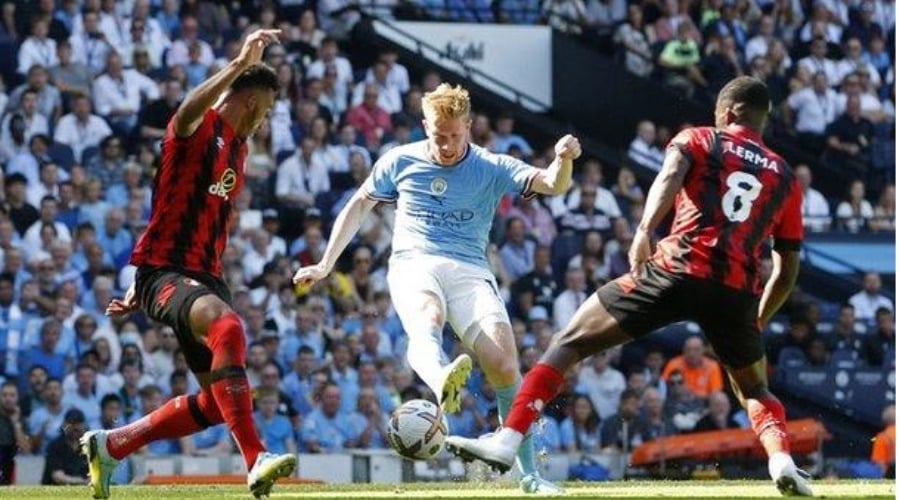 Belgian midfielder Kevin De Bruyne was at his imperious best as Manchester City recorded a comfortable 4-0 win over Bournemouth at the Etihad Stadium on Saturday afternoon.

The victory courtesy of Ilkay Gundogan, Kevin De Bruyne, Phil Foden and an own goal by Jefferson Lerma.

Haaland, who announced his arrival in the Premier League with a match-winning winning brace against West Ham couldn't mark his home debut with a goal, but he turned provider for the opening goal when he held off three defenders to set up Gundogan who slotted pass the Bournemouth goalkeeper.

De Bruyne added the second goal with a brilliant finish with the outside of his boot after a solo run from a Foden pass.

The influential Belgian midfielder returned the favour for Foden when he released the English star with a through pass before he finished past Mark Travers, the Bournemouth goalkeeper with a low drive.

Lerma helped the hosts to put the icing on the cake when he tried to stop Cancelo's cross from getting to Bernardo Silva only for him to divert into his own net.

Manchester City have now scorer six goals in their first two EPL matches without conceding any.

The Defending Champions will be back in Premier League action next Sunday with a visit to Newcastle United.

AFC Bournemouth (/ˈbɔːrnməθ/) is a professional association football club based in Kings Park, Boscombe, a suburb of Bournemouth, Dorse...