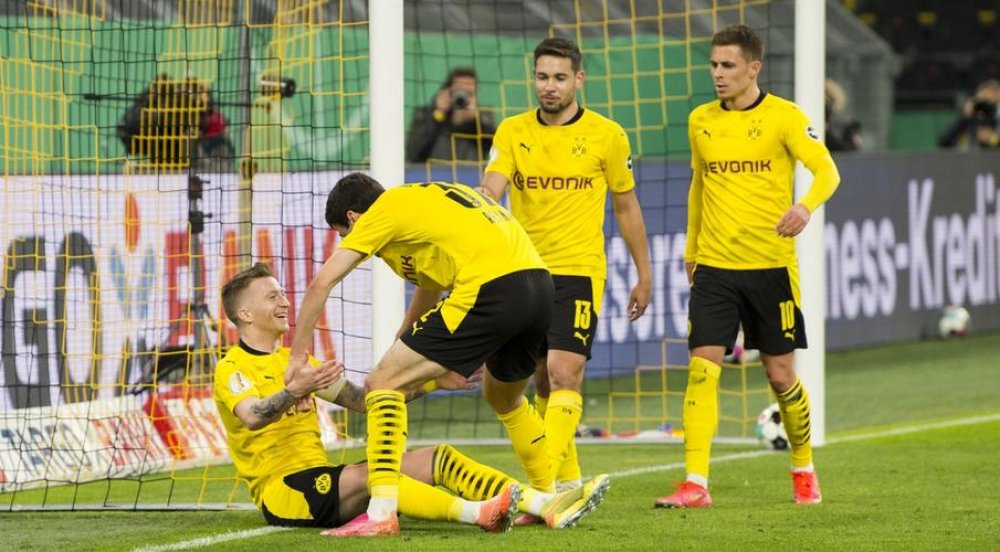 Haaland, suffering from a thigh injury, watched from the stands at Signal Iduna Park as Giovanni Reyna started the rout with the first two goals to help put Dortmund in the final at Berlin's Olympic Stadium on 13 May.

Dortmund will face RB Leipzig, who needed Emil Forsberg's 121st-minute winner at the end of extra time to seal a dramatic 2-1 win at Werder Bremen on Friday in the other semifinal.

"We were very consistent in front of goal. Almost every shot was a goal," Dortmund captain Marco Reus told ARD.

"We are very happy to have reached the final."

Kiel had knocked out holders Bayern Munich on penalties in the second round in January, but any thoughts of another major upset were soon wiped out.

The floodgates opened quickly as Mats Hummels released Jadon Sancho on the left, the England winger cut inside and passed to 18-year-old Reyna who hit the top corner in the 16th minute.

The US midfielder grabbed a second goal six minutes later with a simple tap-in after Reus, then Raphael Guerreiro back-heeled the ball into Reyna's path.

The third goal came on 25 minutes when Emre Can's pass over the Kiel defence found Reus who slammed his shot home.

At the other end, Dortmund had a lucky let-off when Kiel forward Fabian Reese hit the post with goalkeeper Marwin Hitz beaten.

It was just a brief respite as Dortmund forward Thorgan Hazard snatched up a loose pass from Jonas Meffert to score again on 32 minutes.

Then England midfielder Jude Bellingham got on the scoresheet when his shot took a deflection to make it 5-0 at half-time.

Bellingham nearly grabbed his second when he chipped just wide with the goal at his mercy, 14 minutes from time.

However, the win came at a cost.

Dortmund defender Mateu Morey, 21, was stretchered off in clear distress, his cries echoing around the empty stadium, after hyper extending his knee just ten minutes after coming on.

"It's bitter news for him, we know it's a bad injury which over-shadowed the win," added Reus.