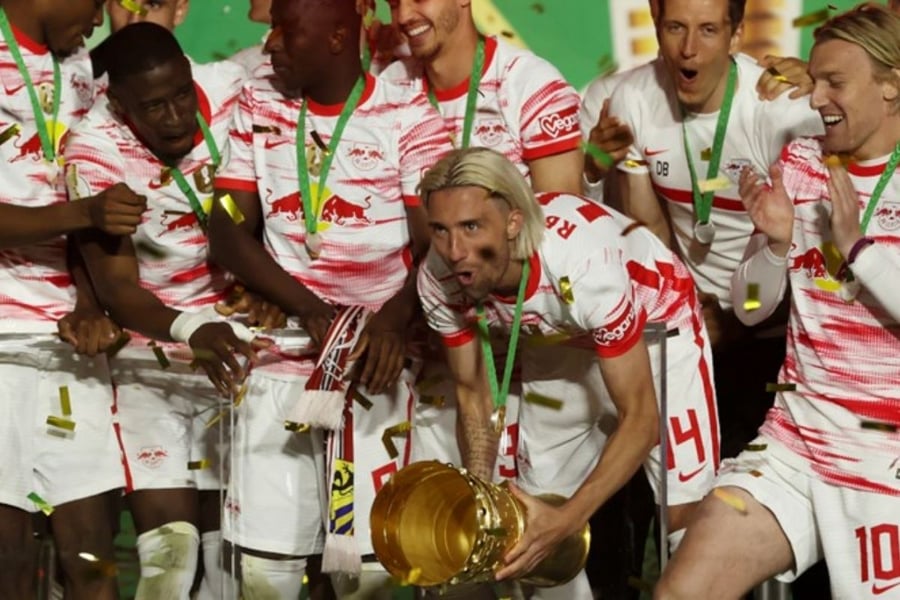 Ten-man RB Leipzig lifted the German Cup at the third attempt on Saturday winning 4-2 on penalties having fought back to draw 1-1 against Freiburg after extra-time.

This was the first time in 11 years that neither Bayern Munich nor Borussia Dortmund reached the final.

Bundesliga champions Bayern were dumped out after a 5-0 thrashing at Borussia Moenchengladbach in the second round last October.

"To win with ten men says a lot about our mentality and I'm really proud. It's great to finally get the first title," said Leipzig midfielder Emil Forsberg.

"We're going to party hard, this is a historic evening for us."

The trophy ceremony was delayed while a person, believed to be a fan, was treated next to the pitch for a medical emergency.

It is the first major title won by RB Leipzig, who are backed by energy drinks giants Red Bull and were only founded in 2009.

They shot up Germany's football pyramid with four promotions in seven years to reach the Bundesliga in 2016/17, twice finishing second to Bayern Munich in the last six years.

In Saturday's shoot-out, Freiburg captain Christian Guenter, and then replacement striker Ermedin Demirovic failed to convert their penalties as Leipzig nailed all four of theirs.

Freiburg stamped their authority when Eggestein's shot from outside the area rocketed past Leipzig goalkeeper Peter Gulacsi on 19 minutes.

Leipzig protested furiously as replays showed the ball clipped the hand of Freiburg's Roland Sallai in the build-up but the goal stood after a VAR review.

The momentum swung towards Freiburg when Halstenberg was left with his head in his hands after earning a red card by pulling the shoulder of Freiburg striker Lucas Hoeler, who was through on goal.

Leipzig deserve credit for fighting back as defender Willi Orban headed a free-kick to the far post where Nkunku tapped in.

Despite the numerical disadvantage, Leipzig pushed for the winner.

Only a reflex save by Freiburg goalkeeper Mark Flekken kept out a Dominik Szoboszlai free-kick, and then Dani Olmo fired wide from close range.

Freiburg replacement striker Janik Haberer had a shot palmed onto the post, then clipped the crossbar in extra time.

Kevin Kampl was shown a red card on Leipzig's bench after furiously appealing for a penalty after Freiburg's Nicolas Hoefler tackled Dani Olmo in the area just the penalty shoot-out.