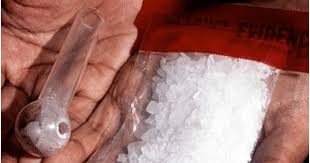 The Ebonyi State Command of the Ebubeagu security outfit, has arrested a 12-man suspected drug syndicate who specialised in the distribution of hard drugs such as methamphetamine, popularly known as mkpurummiri.

Parading the suspects at the command’s office in Abakaliki, Ebonyi State, security consultant, Chief Stanley Okoro-emegha, said the security outfit, on a tip-off, stormed the hideout of the syndicate and arrested 12 of them while others escaped.

He condemned the consumption of the illicit hard drug by youths and urged members of the public to avail the security outfit of useful information that would lead to the arrest of the remaining members of the syndicate.

He noted that a lot of criminal activities perpetrated by hoodlums could be attributed to the consumption of hard and illicit drugs. He disclosed that apart from hard drugs and other substances recovered from the suspects, live ammunition and other dangerous weapons were also recovered from them.

“When we got information of their activities, I immediately arranged with the Ebubeagu personnel who stormed their hideout and, luckily, we were able to arrest them with all these items.

“Twelve of them are here though some of them are at large; we promise, strongly, that we will do everything possible to get those at large.

“I want to use the opportunity to call on the public, information is very vital, a key to security. If we get the information, we will do the needful,” he said.

UNICEF Donates Food, Other Valuables To Flood Victims In Anambra

UNICEF Donates Food, Other Valuables To Flood Victims In Anambra