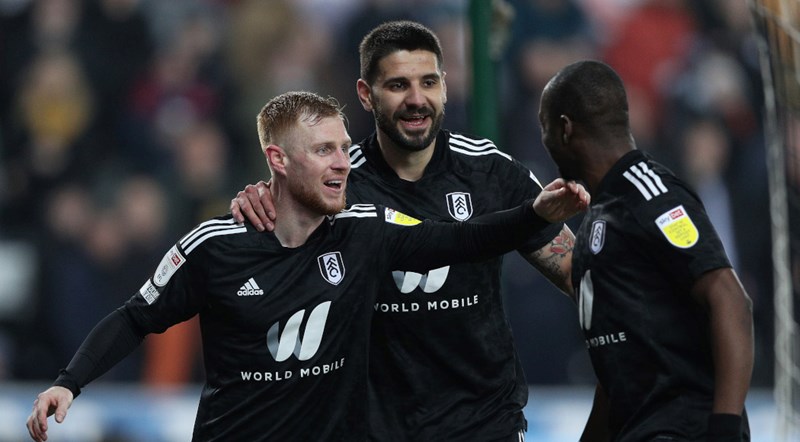 EFL Championship leaders Fulham took another stride towards promotion to the Premier League with a 5-1 win away to Swansea on Tuesday.

The victory left the Cottagers, relegated from the lucrative English top-flight last season, 14 points clear of second-placed Bournemouth, albeit the Cherries have two games in hand.

Only the top two clubs at the end of the regular season are guaranteed promotion to the Premier League.

London club Fulham, fresh from a 2-0 win over promotion rivals Blackburn Rovers last weekend, found themselves with a man advantage in south Wales when Swansea defender Ryan Manning received a straight red card for a foul on Harry Wilson shortly before halftime.

Wilson then helped Fulham go ahead early in the second half when his cross allowed Aleksandar Mitrovic to score his 35th league goal of the season.

An own-goal from Swansea's Ben Cabango saw Fulham double their lead before Bobby Decordova-Reid headed in to make it 3-0 with 17 minutes left.

Joel Piroe pulled a goal back for Swansea, only for Fulham to seal an emphatic win thanks to two goals late on from on-loan Liverpool defender Neco Williams.

Bournemouth endured a frustrating evening after being held to a 1-1 draw by bottom-of-the-table Peterborough.

They fell behind to a goal from Jack Marriott on the half hour and although the Cherries were level early in the second period through Ryan Christie they could not press on.

Sander Berge gave Sheffield United a 23rd-minute lead before Blades captain Billy Sharp soon made it 2-0 with his 15th goal of the campaign.

Jack Robinson volleyed in a third on the hour before Boro substitute Folarin Balogun reduced the deficit in the 62nd minute with his first goal since a loan move from Arsenal.

Morgan Gibbs-White, however, put the result beyond doubt 11 minutes from time as Sheffield United moved up to fifth and Boro dropped out of the top six.

Luton continued their play-off push with a 1-0 win at Coventry while Blackburn held in-form Millwall to a goalless draw at Ewood Park that ended the Lions' five-match winning streak.

Relegation-threatened Barnsley's hopes of a valuable win were dashed by a stoppage-time equaliser in a 1-1 draw at home to Stoke.