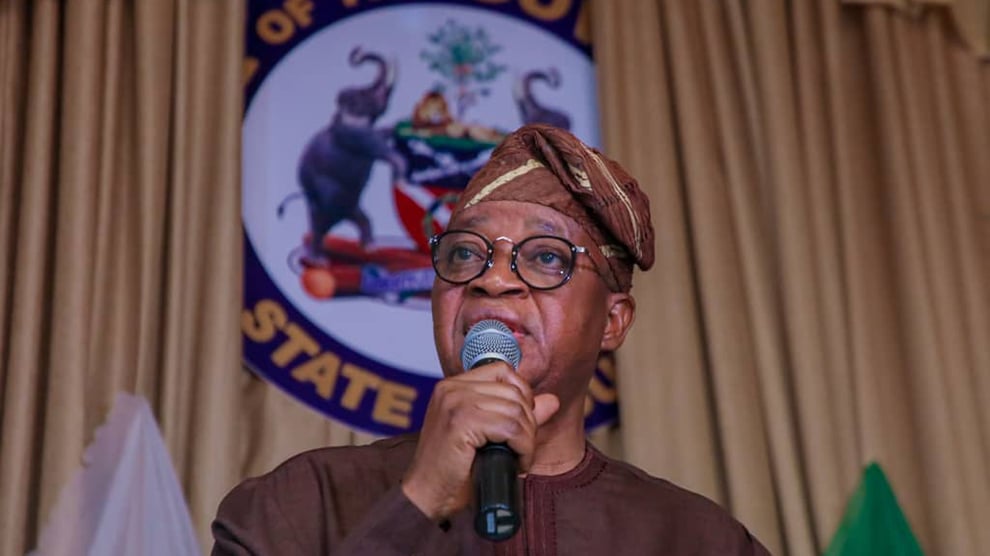 The Osun Governor, Adegboyega Oyetola has congratulated the gubernatorial candidate of the All Progressives Congress (APC) in Ekiti, Biodun Oyebanji, on his victory at Saturday’s governorship poll in the State.

Oyetola in a statement signed by his Chief Press Secretary, Ismail Omipidan, also felicitated the incumbent governor of Ekiti, Kayode Fayemi, national chairman of the APC, Abdullahi Adamu, leaders and supporters of the party on what he described as ‘well-deserved and sweet’ electoral victory.

He equally commended President Muhammadu Buhari and the national leader and presidential candidate of the APC, Bola Ahmed Tinubu for his support and contributions to the triumph of the party and its candidate in the just concluded election.

The governor also rejoiced with the people of Ekiti State for keeping faith with the APC by voting en masse for the party, saying that the outcome of the exercise was a true reflection of their wishes and aspirations.

Oyetola said he was confident that the governor-elect would reciprocate the Ekiti electorate gesture by delivering quality governance and numerous dividends of democracy to the people of the state.

“On behalf of my family, government and the good people of Osun, I congratulate the governor-elect of Ekiti State, Biodun Oyebanji, on his victory at the governorship election held yesterday.

"I also congratulate Governor Kayode Fayemi, the National chairman of our great party, the APC, Senator Abdullahi Adamu, leaders and supporters of the party on this well-deserved and sweet electoral victory.

“With his antecedents and varied leadership experiences, Mr Biodun Oyebanji is no doubt a worthy successor to Governor Fayemi.

"I am confident that he will not disappoint the people of Ekiti,” Oyetola said.

The governor also lauded the Independent National Electoral Commission (INEC), for enhancing the credibility of the electoral process, the security agencies, political parties, and their candidates, and the people of Ekiti for the peaceful and successful conduct of the election.