Following the arrest of former Deputy Senate President Ike Ekweremadu and his wife for organ harvesting and human trafficking, a Catholic priest has shared insight on how the rich engage in such acts to prolong their lives.

News of Ekweremadu's arrest flooded the internet on Thursday after he and his wife were picked up by police in the United Kingdom, with both of them becoming trending topics on Twitter.

Reacting to the news via his Facebook page, a Catholic Priest, Reverend Father Kelvin Ugwu, stated that poverty could have made the family of the boy with Ekweremadu allow him to agree to donate his organ.

According to Ugwu, some wealthy men harvest the blood of newly-born children and young people to live longer.

Do you know that there are rich people who harvest the blood of newly born children and young people for transfusion so that they can prolong their lives because medically it has proven to be effective?

“Do you know some creams and body lotions are made from aborted fetuses because it has proven to revive ageing skin and make them look younger?

“In any way, you may want to look at the Ike Ekweremadu’s case while waiting for the full story to unfold, ask yourself, if not poverty how is it possible that the parent of a 15-year-old or the 15-year-old himself will consent to donate his organ to Ekweremadu?

“What most rich people do, how they trample on the poor and use them as they so wish without any qualm of conscience if I talk about it, you will weep...", the clergyman said. 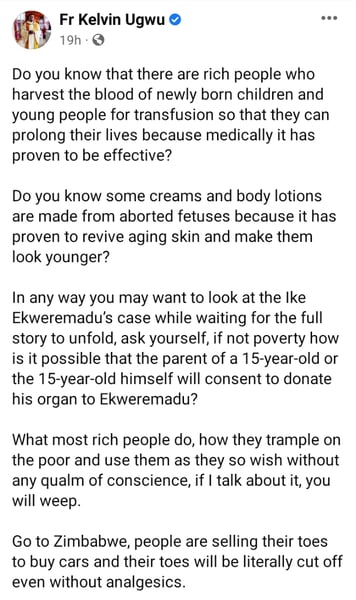