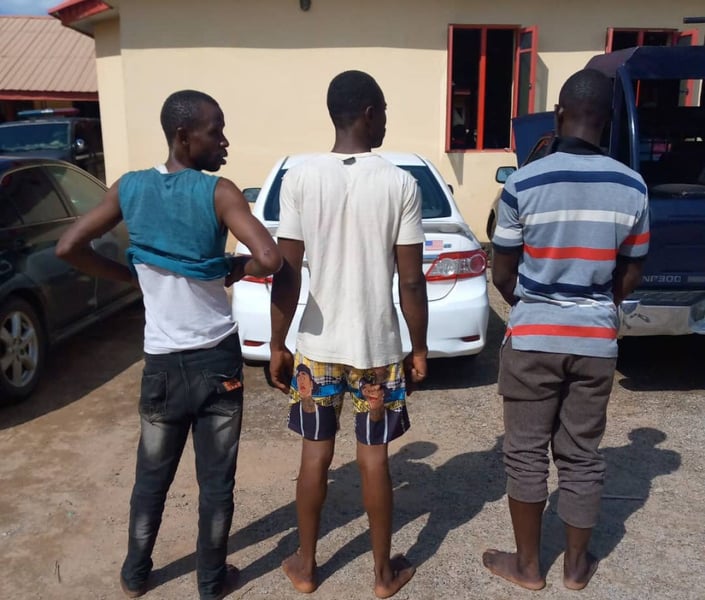 Gospel Osuala, a 26-year-old apprentice electrician who stole eight prepaid meters in Ondo State said in Akure on Monday that starvation and frustration led him into the act.

Osuala, who was paraded by the Nigeria Security and Civil Defence Corps (NSCDC) before newsmen with two other accomplices, Oladele Ibukun, aged 42, and Dayo Akinlade, aged 40, said he went into stealing two weeks ago.

“I stole eight prepaid meters because my sister’s meter was taken by my “Oga’’ who teaches me electrical vocation.

“My sister threw me out of her house because of my “oga’s’’ action.

“I had no way to fend for myself and I was starving, then I got frustrated and stole the meters. I won’t do it again and I am sorry for doing it in the first place,’’ he said.

Osuala said he was caught with only three meters though as he had sold five of the meters he stole, adding that he was confessing so that the matter could be settled at once.

“I was caught with only three meters. NSCDC didn’t know about the other five meters. That is why I decided to confess to everything so that they can retrieve the ones I sold.

“I know that if I did not confess to all now, the ones I sold would eventually be traced to me and I don’t want to get arrested a second time, Osuala added.

Addressing newsmen after Osuala’s confession, Hammed Abodunrin, Commandant of NSCDC in Ondo State, said the suspects were paraded to sensitise the public to be wary about the source of whatever they bought.

“We warn that anyone caught with stolen prepaid meters would be treated as an accomplice because thieves don’t continue to steal if there are no recipients of stolen goods,’’ he said.

He explained that the acquisition of a prepaid meter is procedural and not something one gets off the shelve.

“We warn members of public to be wary about who they patronise to get prepaid meters since the issuance is restricted to constituted institutions,’’ Abodunrin stressed.