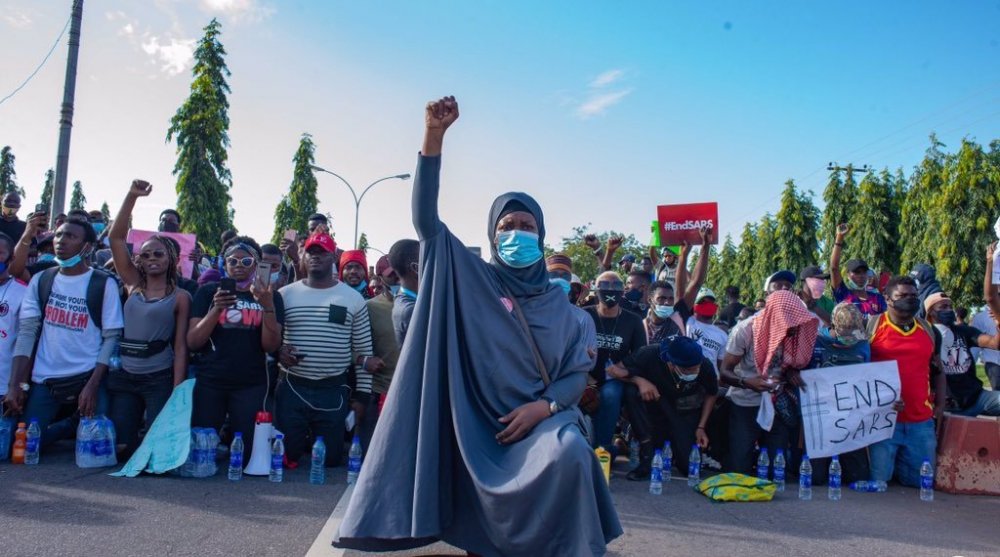 One of the active voices of the #ENDSARS protest, Aisha Yesufu has in reaction to a column by DailyTrust said that protest is a forbidden act under the President Muhammadu Buhari led administration.

Yesufu who took to her Twitter page to react to Bala Muhammad's column on DailyTrust said that Protest is 'Haram' with Buhari as President.

READ ALSO:By-Election: Only Those That Made #ENDSARS Demands Should Be Voted- Aisha Yesufu

Bala who spoke on the insecurity currently rocking the Abuja-Kaduna highway pointed out that the country had no trust in the country's security system.

Still, on the issue of insecurity, Yesufu on Thursday challenged President Muhammadu Buhari to visit  Daura his hometown.

Yesufu who is also a co-covener of the Bring Back Our Girls movement is famous for being very vocal in the fight against police brutality and bad governance.

It will be recalled that AllNews earlier reported that Yesufu told Nigerians not to vote for any candidate that did not support the #ENDSARS protest at the By-election billed for the 5th of December.

The youth in October took to the street of various states to protest against police brutality and call for the disbandment of the Special Anti-Robbery Squad of the Nigerian Police Force.

The protest took a twist after men of the Nigerian army opened fire on peaceful protesters on the 20th of October 2020 at the tollgate in Lekki.

The incident however made some  Nigerians believe that the Buhari-led administration was intolerant to any form of protest.

Denying the incident, the minister of information Lai-Mohammed claimed that the massacre happened only on social media.

President Buhari promised that he will work to ensure that the #ENDSARS protest does not re-occur in the country.