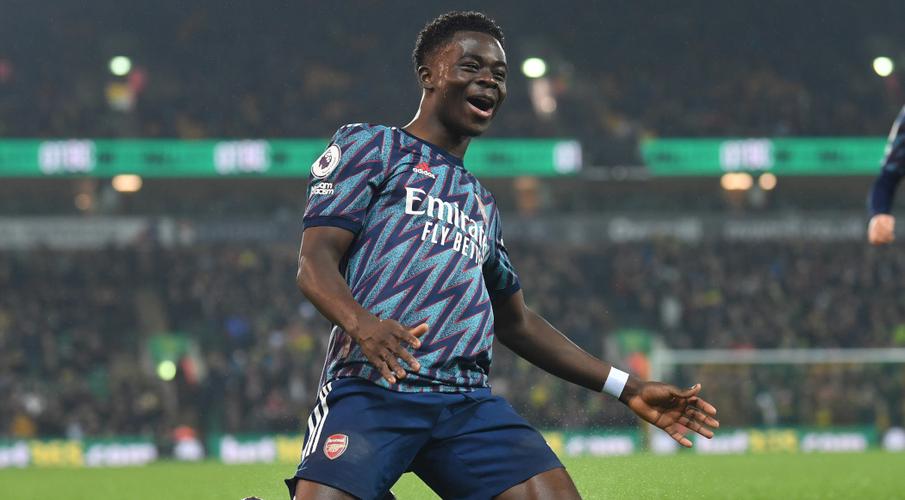 Arsenal cruised to a 5-0 win at bottom side Norwich City on Sunday, with Bukayo Saka's double helping them to secure the victory as they consolidated fourth place in the Premier League.

The win takes Arsenal to 35 points from 19 games following their fourth straight league victory, just over two years since manager Mikel Arteta’s first match in charge of the Gunners.

The visitors took the lead after six minutes through Saka, who stroked the ball past goalkeeper Angus Gunn, who was making his Premier League debut, following a neat passing move that led to Martin Odegaard laying the ball into the forward's path.

Arsenal continued to test the Norwich defence with Saka the danger man thanks to his jinking runs down the wing and Gabriel Martinelli also posing a threat as the Gunners dominated.

Norwich's last festive win was way back in 1987, and they had never won on Boxing Day in the Premier League, so the signs were ominous for the struggling Canaries from the start.

However, it took Arsenal until just before halftime to score again on the break when Scotland left back Kieran Tierney fired home a low shot, with Odegaard again providing the killer pass.

Norwich stayed in the game until the 67th minute but then the floodgates opened as the visitors struck three times.

England forward Saka got Arsenal's third goal with another precise strike after cleverly weaving his way past Brandon Williams on the right edge of the area.

Alexandre Lacazette was then fouled in the box by Ozan Kabak, and the Frenchman got up to convert the spot kick in the 84th.