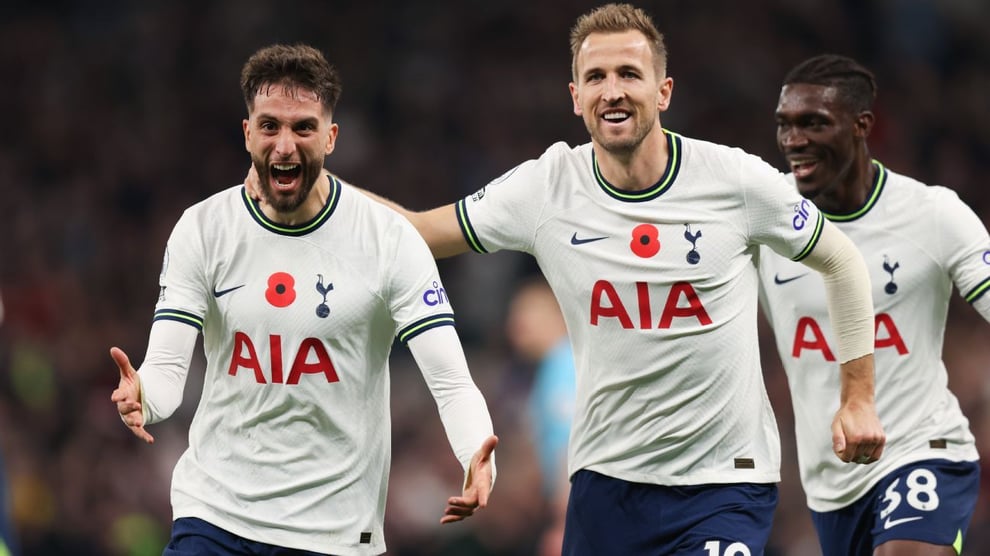 Rodrigo Bentancur's late double secured a thrilling 4-3 victory for Tottenham Hotspur over Leeds United in the Premier League on Saturday -- the hosts coming from behind three times.

Antonio Conte's side appeared to be signing off before the World Cup with a third successive home league defeats an attack-minded Leeds led 3-2 with less than 10 minutes left thanks to Rodrigo's brace.

But Bentancur's deflected shot made it 3-3 in the 81st minute and two minutes later the Uruguayan midfielder was set up by Dejan Kulusevski for a simple finish to somehow leave the visitors empty-handed.

Leeds, who had led early on through the in-form Crysencio Summerville, ended the match with 10 men after Tyler Adams was shown a second yellow card in the closing stages.

Tottenham had levelled initially through Harry Kane's 12th goal of the season with Ben Davies making it 2-2.

Victory briefly lifted Tottenham into third place with 29 points from 15 games but they dropped back to fourth after Newcastle beat Chelsea 1-0 later on Saturday. Leeds are on 15 points in 14th place.

Tottenham's habit of starting slowly returned to haunt them as Summerville's fourth goal in as many top-flight games put Leeds ahead in the 10th minute.

The Dutch winger was played in by Brenden Aaronson and then struck a low shot past Hugo Lloris.

He almost made it 2-0 before Kane levelled for Tottenham after Leeds goalkeeper Illan Meslier's weak punch out arrived at the England captain who made no mistake.

Davies made it 2-2 early in the second half, reacting well after Kane's goalbound effort was blocked by Rasmus Kristensen.

Leeds continued to threaten though and took the lead for the third time when Rodrigo's shot crept in at the far post with Tottenham appealing for a foul in the build-up.

Tottenham dredged up one final effort, though, and Bentancur proved the hero to secure a victory that consolidates their place in the top four.

They are also in the last 16 of the Champions League and Conte will head into the World Cup shutdown satisfied, even if he knows Tottenham are far from the finished article.

"I have to be really pleased with the commitment and behaviour of my players and honestly I have to consider everything, and for this reason, I think that we did a really good job in the first half of the season," he said.