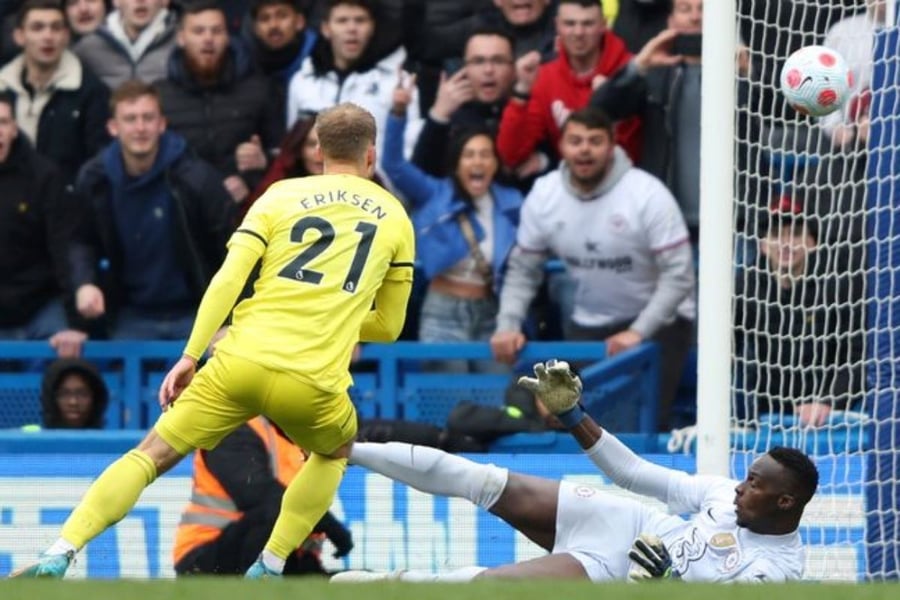 Brentford grabbed all three points at Stamford Bridge on Saturday against Thomas Tuchel's Chelsea who looked tired after the International break and allowed in four goals which cancelled Antonio Rudiger's stunning opener with Real Madrid's visit in mind.

The European champions had gone in front early in the second half at Stamford Bridge through Antonio Rudiger but collapsed to lose for the first time since owner Roman Abramovich was hit by sanctions as Vitaly Janelt's double and goals from Eriksen and Yoane Wissa gave Brentford a famous win.

With Madrid's visit in mind, the defending champions had to shuffle their squad for the Bees but the makeshift formation could not get the match running after the opener.

Brentford grabbed the game at the scruff of its neck when Christian Eriksen scored the second goal on the day with a tap-in at the near post.

Eriksen has been in fine form since making his return to competitive football after suffering a cardiac arrest on the field during Euro 2020.

The former Tottenham midfielder scored twice in as many games during his international comeback for Denmark and continued his scoring streak by lifting the ball over Edouard Mendy to complete the turnaround.

Janelt then made it 3-1 with a deft dink over Mendy on the hour mark.

Third-placed Chelsea remain on course to finish in the top four but will need a major improvement for the visit of Real Madrid in the Champions League quarterfinals on Tuesday.

Yoane Wissa rounded off a memorable afternoon for Thomas Frank's men when he took advantage of more comical Chelsea defending to drill home a fourth.

A third win in four games takes Brentford up to 14th and 11 points clear of the relegation zone.