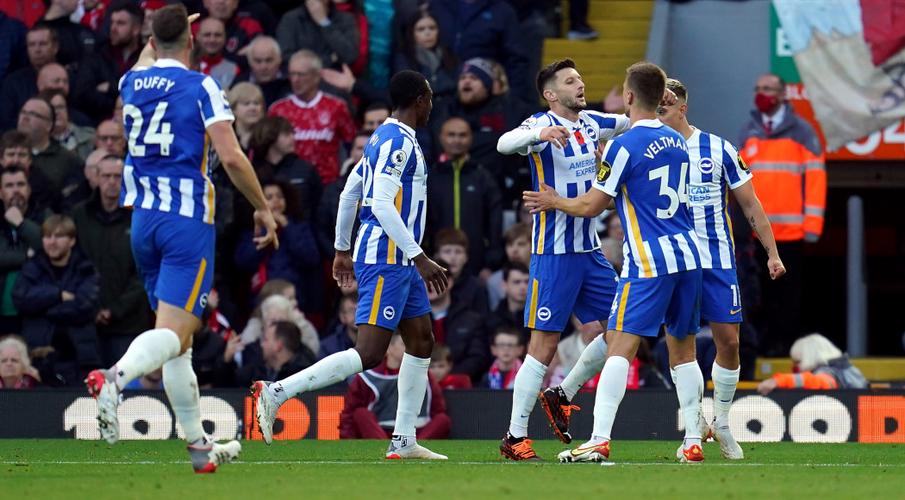 Brighton & Hove Albion fought back from two goals down to earn a surprise 2-2 Premier League draw at Liverpool at Anfield on Saturday.

The result ended Liverpool's four-game winning run in all competitions and left them second in the standings on 22 points from 10 games, three behind leaders Chelsea.

Following a 5-0 drubbing of Manchester United on Sunday and Wednesday's 2-0 League Cup win at Preston North End, Liverpool were full of confidence and early goals from Jordan Henderson and Sadio Mane put them in control.

Brighton showed plenty of intent in the first half as Solly March missed a chance and Yves Bissouma hit the outside of the post after they fell behind, and their bold approach eventually paid dividends.

Henderson fired the home side into a fourth-minute lead with a first-time shot from the edge of the penalty area after he was teed up by Mohamed Salah, and Mane made it 2-0 with a diving header in the 24th from Alex Oxlade-Chamberlain's cross.

Brighton pulled one back in the 41st minute out of the blue as Zambian midfielder Mwepu scored his first Premier League goal with a delightful long-range effort that sailed over Liverpool goalkeeper Alisson Becker.

Brighton gained the upper hand in the second half and drew level in the 65th minute when Trossard side-stepped his marker and drove a low shot past Alisson after an assist by former Liverpool midfielder Adam Lallana.

The end-to-end action at Anfield saw three goals ruled out after VAR checks, as Mane had one chalked off for handball and Salah another for offside while Trossard also had an effort scrapped for offside.

Trossard felt Brighton could have done even better.

"I think we started off poorly in the first half but after they scored their second we came back into it," the Belgian forward told the BBC.

"We got our goal and believed a lot more. What a good game, we could have won it as well, it's such fine margins but we're really happy with a draw".