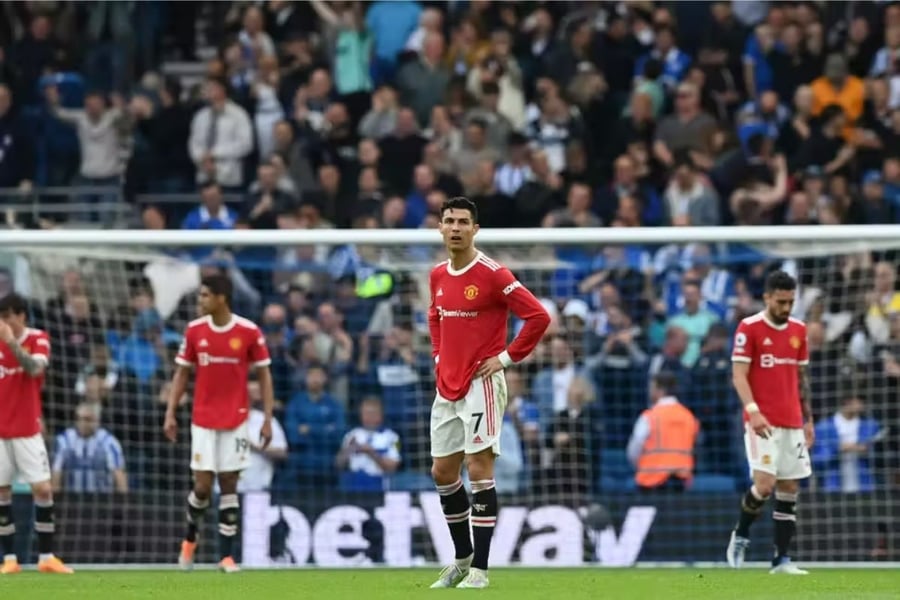 Brighton & Hove Albion condemned Manchester United to a 4-0 defeat that ended their hopes of finishing in the Premier League's top four on Saturday.

United have endured a host of humiliations in one of their most embarrassing seasons for decades and this lacklustre loss was among the very worst.

Ralf Rangnick's side were routed by goals from Moises Caicedo, Marc Cucurella, Pascal Gross and Leandro Trossard at the Amex Stadium.

After 5-0 and 4-0 defeats against arch-rivals Liverpool, a 4-1 loss at Watford that saw Ole Gunnar Solskjaer sacked in November and an FA Cup at home to Championship side Middlesbrough, it seemed impossible for United to fall any further.

But they were so gutless and hopeless on the south coast that even United's travelling supporters turned on them.

Sixth placed United are certain to miss out on the Champions League for only the fifth time in 30 seasons.

With 58 points and only one game left, United's fifth successive away defeat means they will finish with their lowest points total in the Premier League era.

It would be no surprise if Erik ten Hag, the Ajax boss who has agree to take charge of United from next season, was having second thoughts about his decision to accept the task of rebuilding a team languishing well behind the standards set by Liverpool and Manchester City.

The United fans massed at one end of the Amex Stadium set the tone for another toxic evening as they chanted for the club's owners the Glazer family to sell up and held up banners reading 'We want our club back'.

Not for the first time this season, United's players failed to lift the gloom.