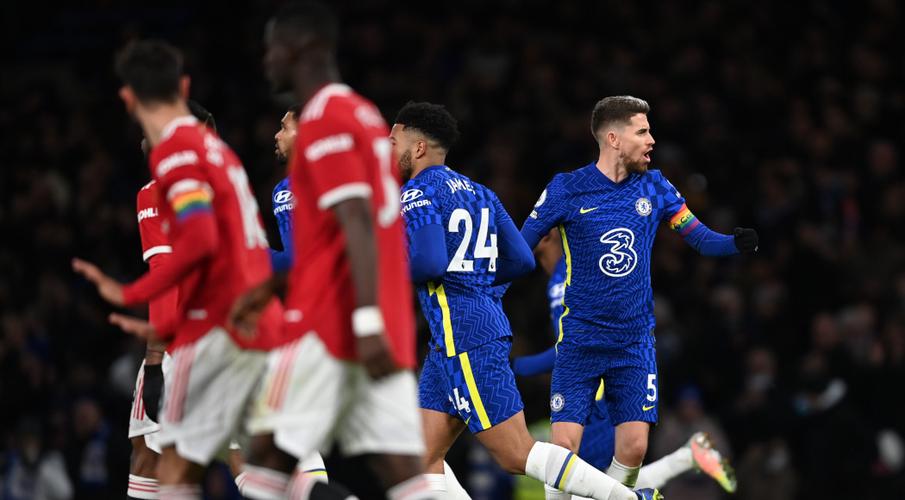 Chelsea midfielder Jorginho made amends to the initial blunder to give Chelsea a 1-1 draw against Manchester United at Stamford Bridge on Sunday.

Thomas Tuchel's side dominated for long periods at Stamford Bridge but fell behind when Jorginho's poor control presented Sancho with the chance to score his second goal for United early in the game.

Jorginho atoned for his earlier mistake as he stroked home a penalty after Aaron Wan-Bissaka fouled Thiago Silva.

It was the least Chelsea deserved after they laid siege to United's goal and saw David de Gea make a series of fine saves.

Chelsea, unbeaten in their last 11 games in all competitions, remain top of the Premier League but are now just one point ahead of second-placed Manchester City, who defeated West Ham earlier on Sunday.

United, in eighth place, are 12 points adrift of the leaders but this gritty display was something to build on after a traumatic period.

Michael Carrick was in charge of United for a second successive game after Ole Gunnar Solskjaer's sacking, with the appointment of Ralf Rangnick as interim manager until the end of this season expected to be confirmed shortly.

United are in discussions with Rangnick, who is working as director of sports and development at Lokomotiv Moscow.

But in the meantime Carrick had overseen a vital win at Villarreal in the Champions League on Tuesday and he used the same defensive blueprint to frustrate Chelsea.

Given Rangnick's preference for a intense pressing game-plan that may not suit Cristiano Ronaldo, it was intriguing to see the sometimes diffident Portugal striker left on the bench by Carrick until the 63rd minute.With Bruno Fernandes as the false nine and Marcus Rashford and Sancho on the flanks, United set up for a point and got exactly that.

Hakim Ziyech found space in the United area early on but his low shot was saved by De Gea, setting the tone for the rest of the afternoon.