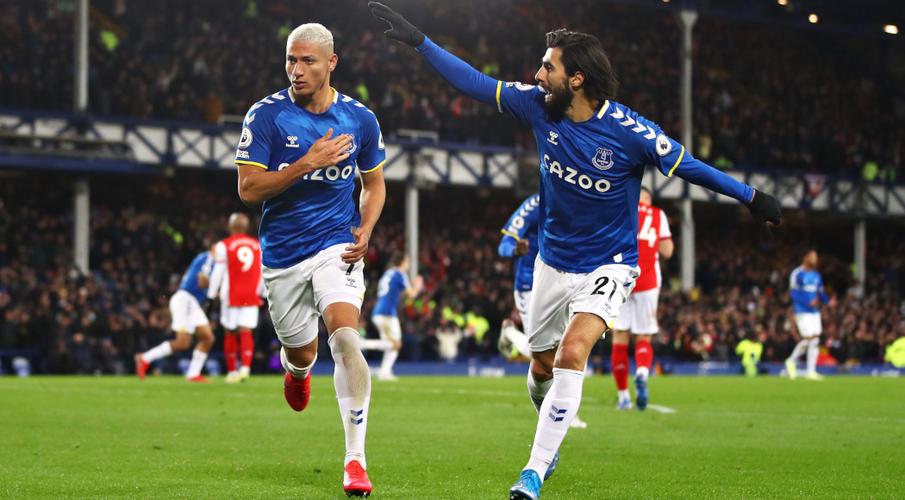 Everton scored twice in the last 11 minutes to end an eight-game winless run with a 2-1 victory over Arsenal that lifts the pressure off manager Rafael Benitez.

Another night of frustration looked in store for the Toffees as Richarlison had two goals marginally ruled out by VAR for offside either side of Martin Odegaard's opener for the Gunners.

But Richarlison was not to be denied a third time when he headed home before Demarai Gray smashed home a thunderous strike in stoppage time for a deserved win.

A planned supporter protest for the 27th minute to mark 27 years without silverware for Everton did not result in a mass walkout and the home crowd played their part in a stirring fightback.

Benitez was not a popular appointment among the Everton fans due to his history as a former manager of local rivals Liverpool.

A 4-1 defeat by the Reds in their last outing increased calls for the Spaniard to be sacked, but his position at the club was strengthened over the weekend as it was sporting director Marcel Brands who departed.

There was far more cause for optimism among the crowd at Goodison Park as they opened up an eight-point cushion over the relegation zone and climbed up to 12th in the table.

By contrast, it was another damaging night for Arsenal's chances of returning to the Champions League next season as they suffered a third consecutive away defeat to remain four points adrift of the top four.

Everton were lucky not to go down to 10 men midway through a tepid first half when Ben Godfrey's stamp onto the face of Takehiro Tomiyasu went unpunished by VAR.

Richarlison brought the game to life when his header found the far corner from Andros Townsend's free-kick, but had just strayed offside.

Moments later, Arsenal had a half-time lead rather than a deficit as Kieran Tierney's cross perfectly picked out Odegaard to steer into the bottom corner.

There was no sense of Everton's players giving up on their manager after the break as they came flying out the traps and thought they had levelled when Richarlison smashed home at the near post from Abdoulaye Doucoure's pass.

However, again he was denied by VAR for the finest of margins.

It was third time lucky for the Brazilian 11 minutes from time as he sent a looping header over Aaron Ramsdale after Gray's shot rattled the Arsenal crossbar.

Arsenal boss Mikel Arteta had dropped Pierre-Emerick Aubameyang from his starting line-up and did not even introduce the club captain with his first change to his forward line as Eddie Nketiah replaced Gabriel Martinelli.

That decision came back to haunt the former Everton midfielder as Nketiah headed onto the post with the goal gaping six minutes from time.

Two minutes into stoppage time, Gray produced the moment of quality that could turn his side's season as he charged towards goal and unleashed an unstoppable drive in off the post.

There was still time for Aubameyang to salvage a point, but his wayward finish with just Jordan Pickford to beat with the last kick of the game showed why Arteta felt he could not trust the Gabon international from the start.