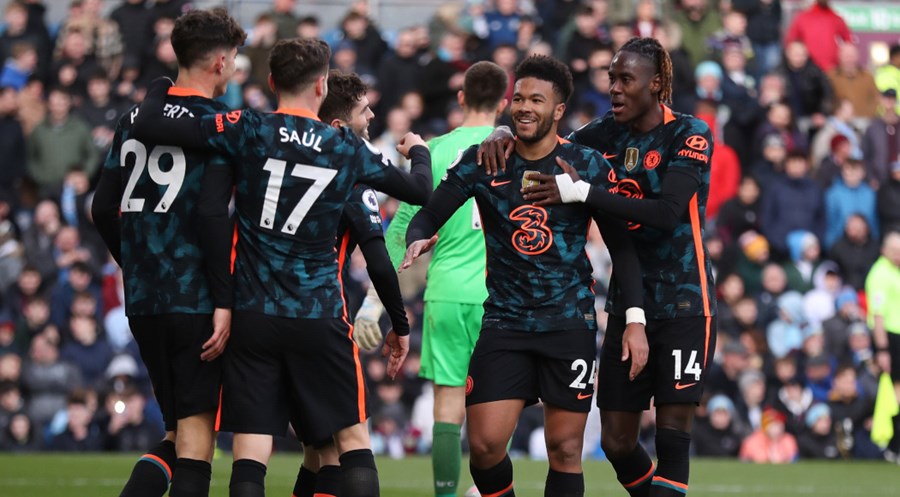 German forward Kai Havertz scored a brace for Chelsea to pick up a third straight Premier League win with a 4-0 victory at lowly Burnley on Saturday with an emotional atmosphere at Turf Moor.

Chelsea fans chanted the name of their Russian owner Roman Abramovich during a minute's applause in solidarity with Ukraine on Saturday.

There have been gestures of support for Ukraine before kick-off at Premier League games, and Burnley's ground featured the slogan "Football Stands Together" and the Ukrainian flag on a large screen.

Then Thomas Tuchel's side took Burnley to slaughter as they scored three times in an eight-minute spell at the start of the second half as Burnley, who had wasted a series of chances in the first half, fell apart.

Reece James, starting his first game since December, opened the scoring two minutes after the interval, drilling a shot into the far, bottom corner after turning Dwight McNeil inside out.

Havertz then pulled away from his marker Connor Roberts to head home a nicely floated cross from Christian Pulisic to make it 2-0 for the visitors.

The German then had another simple finish, converting a James cross from close range, and Pulisic had the easiest of tasks scoring after Burnley defender James Tarkowski diverted a Saul Niguez cross into his path.

Chelsea are third on 53 points, 13 points behind leaders Manchester City while Burnley stay in 18th place on 21 points.