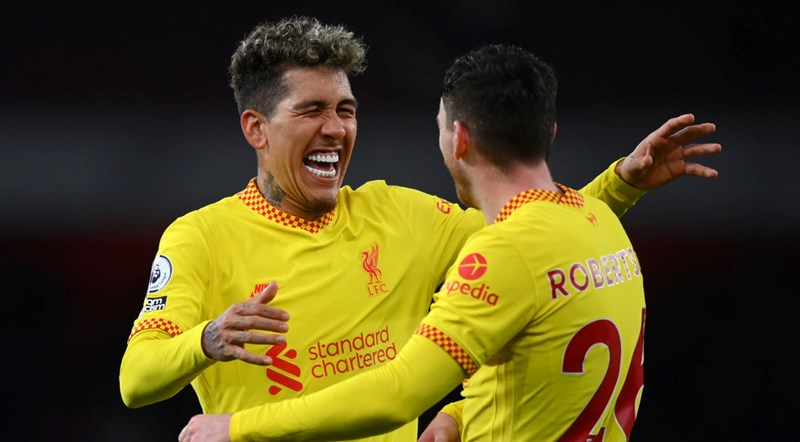 Diogo Jota and Roberto Firmino inspired a crucial 2-0 win against Arsenal on Wednesday as Liverpool are just one point behind Manchester City at the top of the Premier League summit.

Jurgen Klopp's side took advantage of City's goalless draw against Crystal Palace on Monday thanks to their smash and grab raid at the Emirates Stadium.

Arsenal enjoyed a sustained period of pressure that could easily have yielded the opening goal, but Alisson Becker made a superb save to deny Martin Odegaard and Liverpool capitalised to steal the points.

Having trailed City by 14 points on January 15, Liverpool have hunted down the champions impressively, putting the race in their own hands as they eye a second title in three seasons.

A victory against Watford in their next league game on April 2 would set the stage for a seismic showdown with Pep Guardiola's team at the Etihad Stadium on April 10.

Finding a way to subdue an in-form Arsenal side who had won their previous five league games to climb to fourth place made the victory in rain-soaked North London even more impressive.

No wonder Klopp and his players celebrated so jubilantly at the final whistle.

Klopp threw down the gauntlet to City this week when he admitted he wants Liverpool to be as "annoying as possible" in the title race.

There is no doubt Liverpool are proving extremely irritating, especially since they beat the Gunners with Mohamed Salah starting on the bench after suffering a foot injury in Saturday's win at Brighton.

Liverpool had knocked Arsenal out of the League Cup semifinals in January.

But after several years in the doldrums, Arsenal are on the up and the vibrant atmosphere at the often subdued Emirates reflected that renewed confidence in Mikel Arteta's young team.