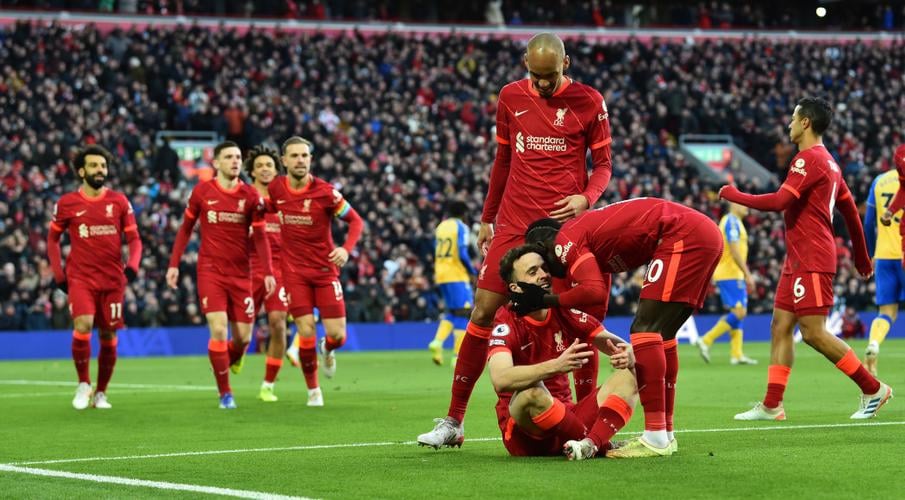 Diogo Jota struck twice to propel Liverpool close to Premier League leaders Chelsea after a 4-0 stroll past Southampton on Saturday.

Liverpool's long unbeaten run was ended by high-flying West Ham earlier this month but they have clicked effortlessly back into gear, scoring 10 goals without reply in three games since that defeat.

Portugal forward Jota scored a first-half double at Anfield, with Thiago Alcantara adding a third to effectively end the contest against their demoralised opponents eight minutes before half-time.

A goal from former Southampton defender Virgil van Dijk early in the second half underlined the dominance of the home side.

Jurgen Klopp's team, who won the Premier League in 2020, have now scored 39 goals in 13 league games this season, nine more than Chelsea, who host Manchester United on Sunday.

Klopp reverted to his strongest line-up for the visit of Ralph Hasenhuttl's Southampton after they beat Porto 2-0 in midweek and was rewarded with a goal within two minutes.

Andy Robertson combined well with Sadio Mane down the left and got to the byline to pull back for Jota, who scored from close range.

Mane had the ball in the net again after he was fouled by Jan Bednarek -- the Senegalese forward headed home the resulting Robertson free-kick -- but the flag went up for offside.

Mohamed Salah went close but Southampton themselves had a good chance to equalise when Armando Broja failed to beat goalkeeper Alisson Becker after seizing on a careless Liverpool throw.

Jota doubled his tally in the 32nd minute after Southampton were cut open down their right side.

Salah collected a clever return pass from Jordan Henderson to slide a low cross to Jota, who tapped home from close range.

Midfielder Thiago made it two goals in as many games with a deflected shot eight minutes before half-time to virtually seal the three points for Liverpool.

The free-scoring home side picked up where they had left off after the break when Van Dijk scored against his former club, squeezing a low volley home after a corner from Trent Alexander-Arnold.

Liverpool, who play Everton in the Merseyside derby in midweek, now have 28 points after 13 games following their eighth win of the season.