EPL: Liverpool Thrash Brentford To Move Past Chelsea To Second On Standings 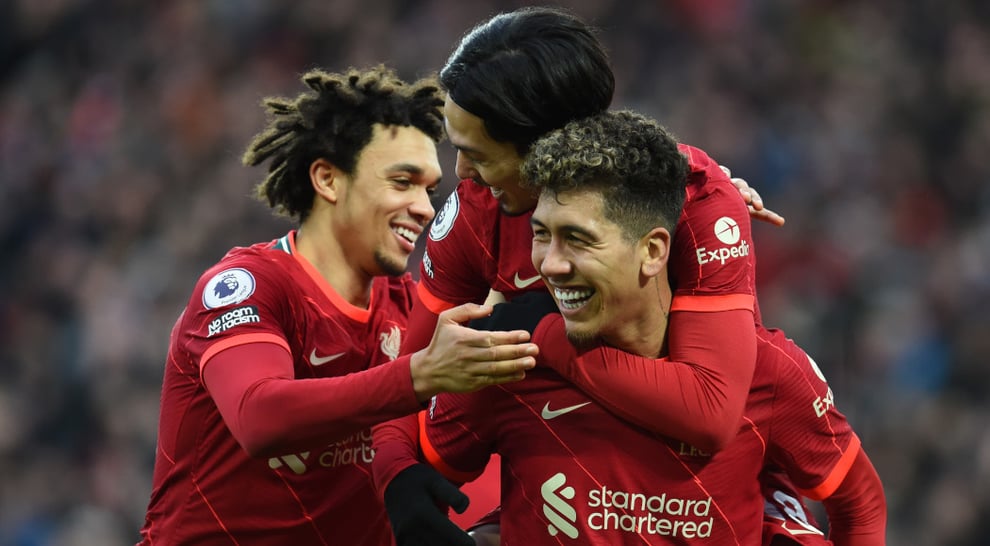 Liverpool thrashed Brentford 3-0 to go second on the Premier League standings at Anfield on Sunday despite the missing star duo of Sadio Mane, Mohamed Salah while on International duty.

Fabinho, Alex Oxlade-Chamberlain and Takumi Minamino scored the goals to lift Jurgen Klopp's men to within 11 points of the runaway leaders, but they also have a game in hand on City.

Liverpool failed to take advantage of an extra man for over an hour as Thursday's League semifinal, first leg against Arsenal ended 0-0, sparking fears of how they will cope for the rest of the month without two of their main sources of goals.

But the Bees side that have not won a league game away from home since early October never threatened to cause an upset.

Klopp made just two changes from the Arsenal stalemate as Curtis Jones and Oxlade-Chamberlain were recalled to add extra creativity and dynamism to the midfield.

He was rewarded with a bright start as Diogo Jota headed over, Trent Alexander-Arnold flashed a shot just off target and Alvaro Fernandez made a brilliant save to deny Virgil van Dijk.

However, the crowd were growing restless until Brentford allowed Alexander-Arnold's corner to bounce inside the area and Fabinho headed in at the back post.

The Bees went toe-to-toe with Liverpool in a pulsating 3-3 draw when the sides last met in September.

But the visitors only created one big chance to get back in the game when Bryan Mbuemo turned Joel Matip and shot inches wide.

Jota hit the post and then should have scored when firing too close to Fernandez in a one-on-one.

There was no doubt over the outcome, though, once Oxlade-Chamberlain's diving header turned Andy Robertson's perfect cross into the bottom corner.

Brentford were architects of their own downfall for the third goal as Fernandez's pass out from the back was seized upon by Roberto Firmino and he teed up Minamino to slot home from close range.

The home fans could relax for the final 15 minutes and pointedly took the chance to chant the name of former manager Rafael Benitez, who was sacked by rivals Everton on Sunday.

The Toffees are in danger of falling into a relegation battle after one win in 13 league games.

Brentford, by contrast, still enjoy a 10-point cushion over the bottom three in their first season in the top-flight for 74 years but remain in 14th.