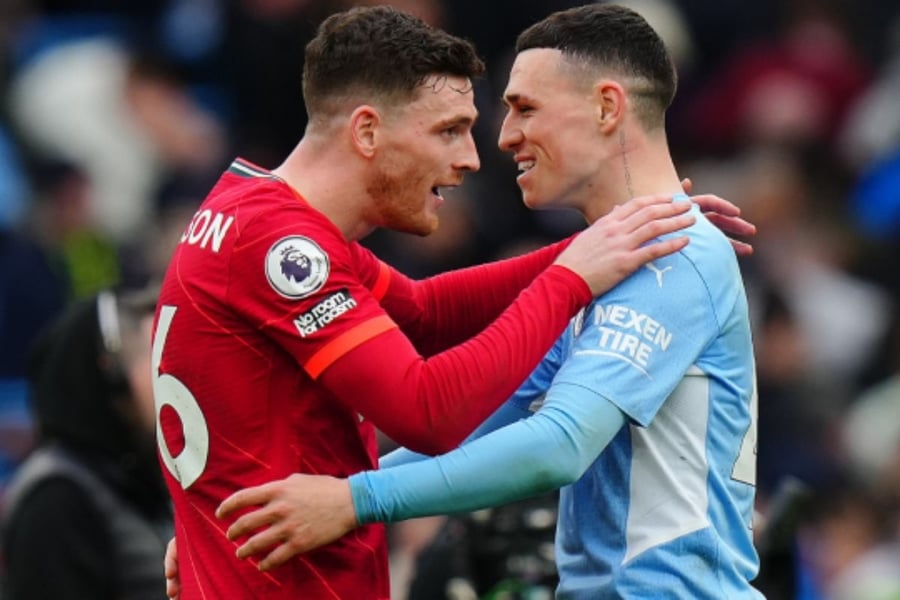 Manchester City remained one point clear of Liverpool at the top of the Premier League standings after the highly-anticipated clash of the giants ended in a pulsating 2-2 draw at the Etihad Stadium on Sunday.

The match lived up to its billing right from the off as City flew out of the traps, racing into a fifth-minute lead after Kevin De Bruyne's strike was deflected past Liverpool goalkeeper Alisson.

City, playing with the high pressing intensity that their opponents are famed for, could have taken the lead moments earlier but Raheem Sterling shot softly at Alisson from a glorious position.

With the raucous home crowd sensing Jurgen Klopp's side were wobbling, however, Liverpool showed their mettle as they regrouped and levelled eight minutes later through Diogo Jota, assisted by a perfectly-cushioned Trent Alexander-Arnold pass.

The tempo was relentless, the action gripping and the momentum shifted again when Gabriel Jesus restored City's lead in the 36th minute.

Liverpool cleared a corner only as far as Joao Cancelo and the Portuguese full-back floated the ball back deep into the box where Jesus had stayed onside, nipping past Alexander-Arnold and steering the ball past Alisson.

It was the first time Liverpool had trailed at the break in the Premier League this season, but they did not need long to restore parity, scoring 46 seconds after the restart.

Mohamed Salah picked the ball up on the right flank and split the City defence with a superb pass to Sadio Mane who burst goalwards before converting with his customary precision.

City were stunned but Pep Guardiola's side recovered to regain control of the midfield for much of the second half and they came closest to winning the game.

Raheem Sterling thought he had again given the hosts the advantage in the 63rd minute, racing on to a brilliant De Bruyne through ball, only for the former Liverpool forward to be ruled offside following a VAR review.

In the 90th minute, City substitute Riyad Mahrez shaved the outside of the post with a free-kick and in stoppage time the Algerian had a great chance to win the game but his attempted chip was off target.

It was a questionable decision from Mahrez when a more conventional approach might have paid off but City were left to digest a point that changes little in the race.

"It's a great chance. Riyad chose to chip and if it goes in it's a wonderful goal," said De Bruyne.

"We played very well, I think we had the upper hand. This is the way we need to play the rest of the season. I know people said whoever wins gets the title. But it's too hard, the schedule is too tough for both teams to win every game, but we will try," added the Belgian.

The result was a repeat of October's scoreline at Anfield and was the first time City had scored first and not gone on to win in the Premier League this season.

A fourth Premier League crown in five seasons is in City's hands, though, as they moved on to 74 points, one ahead of their title rivals, but with seven games left for both teams, there is still plenty of work to do.

"Of course, we knew we would come under pressure early on, they are a fantastic team," said Liverpool captain Jordan Henderson.

"I felt we settled down a bit and caused them problems. It's pleasing how we twice came from behind. We have to concentrate on ourselves and win as many games as possible. If they slip up we have to be there right behind them. We'll keep going until the end," he added.