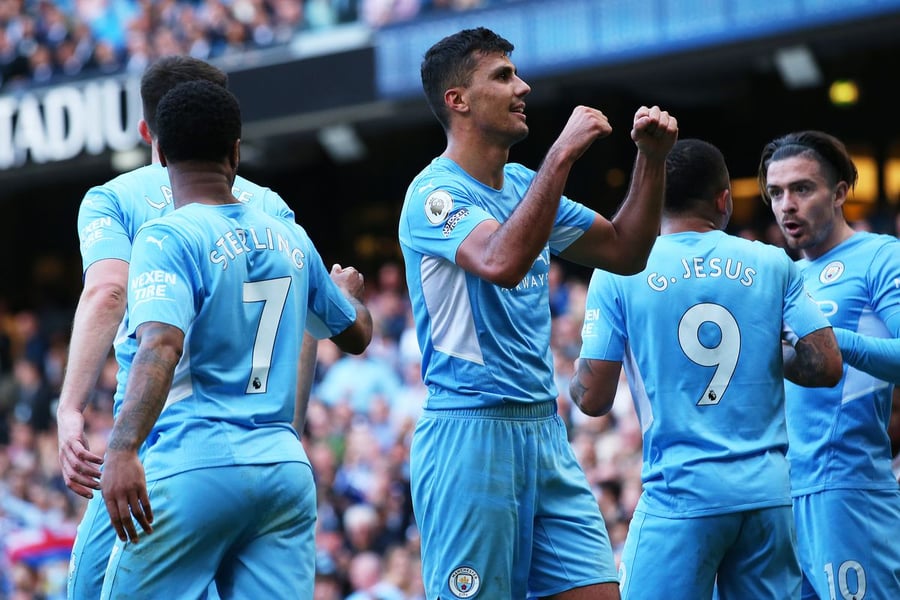 Manchester City moved three points clear of Liverpool in a bid to retain the Premier League title with a 5-0 demolition of Newcastle United on Sunday.

Pep Guardiola's side took control before half-time at the Etihad Stadium thanks to goals from Raheem Sterling and Aymeric Laporte.

Rodri got City's third after the break before Phil Foden and Sterling struck in stoppage time as they stormed back to the top of the table.

Liverpool had knocked the champions out of pole position with their 1-1 draw against Tottenham on Saturday.

But City are now three points clear of Liverpool, with three games left for both teams. Guardiola's men hold a goal difference four better than the Reds.

Quadruple chasing Liverpool are next in action at Aston Villa on Tuesday, while City head to Wolves 24 hours later.

City's stroll against Newcastle was the ideal way to recover from their painful Champions League semifinal exit against Real Madrid on Wednesday.

Real had scored twice in the final seconds of normal time before winning in extra-time, leaving Guardiola to lament there were "no words to help" his players get over the loss.

But City can exorcise those demons by winning a fourth English title in five seasons and this was a step in the right direction.

In the 19th minute, Joao Cancelo nodded an Ilkay Gundogan cross towards Sterling and he dived to head in from close-range.

City doubled their lead after 38 minutes when Newcastle keeper Martin Dubravka was unable to hold onto Gundogan's volley and Laporte scrambled home.

Rodri scored with a 61st minute header from Kevin De Bruyne's corner, then Foden diverted Oleksandr Zinchenko's shot into the net in the 90th minute.

Sterling rounded off the rout in stoppage-time with a cool finish from Jack Grealish's pass.