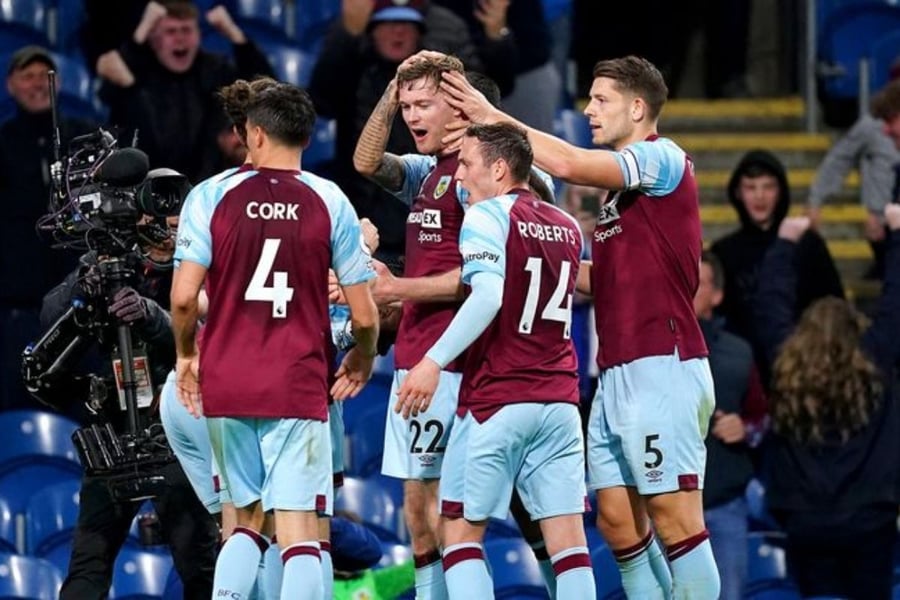 Managerless Burnley improved their chances of avoiding relegation from the Premier League as Connor Roberts' superb strike inspired a vital 2-0 win against Southampton on Thursday.

The Clarets won for the first time since Sean Dyche's sacking thanks to Roberts' sublime curler and Nathan Collins' header.

Roberts' first goal for Burnley following his August move from Swansea came early in the first half at Turf Moor and proved the key moment.

It was just their fifth league victory this term, in interim manager Mike Jackson's second game since Dyche's surprise sacking last week after 10 years in charge.

Third bottom Burnley remain in the relegation zone but they are now just one point behind fourth bottom Everton, who have a game in hand.

Burnley host Wolves on Sunday and, with Everton facing quadruple chasing Liverpool the same day, Jackson's team are in with a chance of climbing out of the bottom three this weekend.

"The players remembered what they were. We haven't done loads different but they have come together as a group. Everyone has mucked in and it is a great result," Jackson said.

"I will probably speak to the chairman and he will let me know if I'm needed for next game. We have to make sure we deliver against Wolves."

Just hours before kick-off, Dyche had spoken for the first time since his sacking, speaking warmly about the "truly incredible times" he enjoyed with Burnley.

There was a feeling in some quarters that Burnley stagnated in the final year of Dyche's reign, but only avoiding relegation will back the club's decision to sack him.

This was a small step in the right direction for Burnley and their chairman Alan Pace.

For the first time since 2012, Burnley were playing a home game without Dyche and they started nervously.

Roberts eased the palpable anxiety in the 12th minute with a superb effort, the Wales defender taking aim from the edge of the area and curling his shot past Saints keeper Fraser Forster into the far corner.

Wout Weghorst should have doubled Burnley's lead moments later but Forster spread himself to save the striker's close-range effort.

Weghorst was denied again by Forster's brilliant stop as Burnley piled on the pressure.

Forster was all that stood between Burnley and a second goal as he palmed Jay Rodriguez's flick out to Weghorst, who headed the rebound against the post.

Romeu wasted a golden opportunity to equalise with a wayward header before Forster made yet another excellent save from Dwight McNeil's low drive.

Forster's inspired resistence couldn't last and Collins headed Burnley's second goal from Josh Brownhill's corner in the 44th minute, with a VAR check for a potential offside against Jack Cork going in the Clarets' favour.

Burnley were a constant threat from crosses and Cork bundled home from Tarkowski's header early in the second half, only to see the goal disallowed for offside this time.

Out-working Southampton in all areas, Burnley didn't concede a shot on target until the 67th minute when Nick Pope kept out Che Adams' volley.