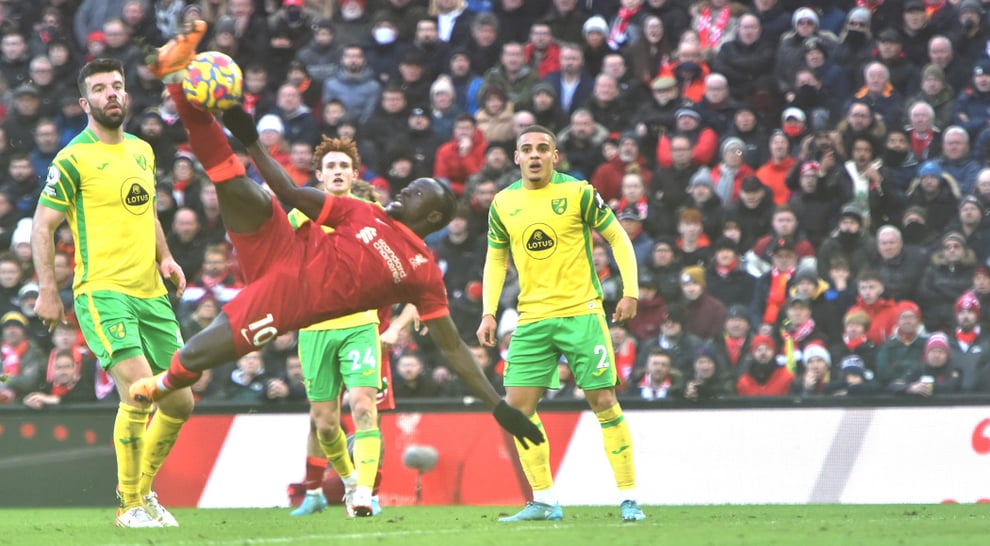 Liverpool dug deep to secure a rather comfortable 3-1 victory against Norwich City with goals by Sadio Mane, Mohamed Salah and Luis Diaz to prevent a shocking loss at Anfield on Saturday.

Jurgen Klopp's side secured two things to Liverpool -- saved face from a defeat at home and also reduced Premier League leaders Manchester City's lead to six points -- even if it would just be a few hours.

Norwich looked to upset the Reds when Milot Rashica's shot deflected off of Joel Matip to give the Canaries the lead just after the break, Liverpool's hopes of putting some pressure on City looked in peril.

They were eventually rewarded for their intense pressure when Mane's overhead kick levelled it up in the 64th minute and less than three minutes later Salah made it 2-1 after latching onto a long clearance by keeper Alisson.

Diaz calmed Liverpool's nerves with a delightful finish in the 81st minute, finally flooring a courageous Norwich side.

Liverpool's fifth successive league win, and eighth in all competitions, put them on 57 points from 25 games, with City, who host Tottenham Hotspur later, on 63.

For all their effort, defeat put Norwich back at the bottom of the table after wins for Burnley and Watford.

Dean Smith's side have 17 points, five behind 17th-placed Newcastle United who have played a game less.

"Norwich have a very different style but played a proper game, defended deep, had their counter attacks, made it really tricky for us," Klopp said.

"We had moments and then the game can look completely different, then a deflected ball can be pretty decisive, but these boys just don't give up."

What had looked on paper like a formality, was anything but as Norwich went toe-to-toe with Liverpool from the first whistle during an absorbing first half.

But Norwich used the counter-attack to great effect and should have gone in front when Brandon Williams played in Teemu Pukki, who fired a golden chance wide.

Liverpool responded with a wave of attacks with Salah's header being cleared off the line, but they could not crack Norwich's rearguard.

The visiting Norwich fans could hardly believe their eyes in the 48th minute when Rashica cut in from the left and his right-footed shot clipped Matip before looping past Alisson.

It produced a furious response from the hosts who brought on Thiago and striker Divock Origi with midfielders Naby Keita and Alex Oxlade-Chamberlain making way.

The game was turned on its head when Konstantinos Tsimikas headed across goal towards Mane who acrobatically volleyed in.

Norwich went back on the attack but were caught out when Alisson launched a huge clearance and Salah found himself clear. The Egyptian turned cleverly to open up some space and then struck a shot that wrong-footed Norwich's covering defenders.

It was his 150th goal in all competitions for Liverpool and Diaz, signed from Porto last month, then opened his Liverpool account with a dinked finish over Gunn from Jordan Henderson's defence-splitting pass.