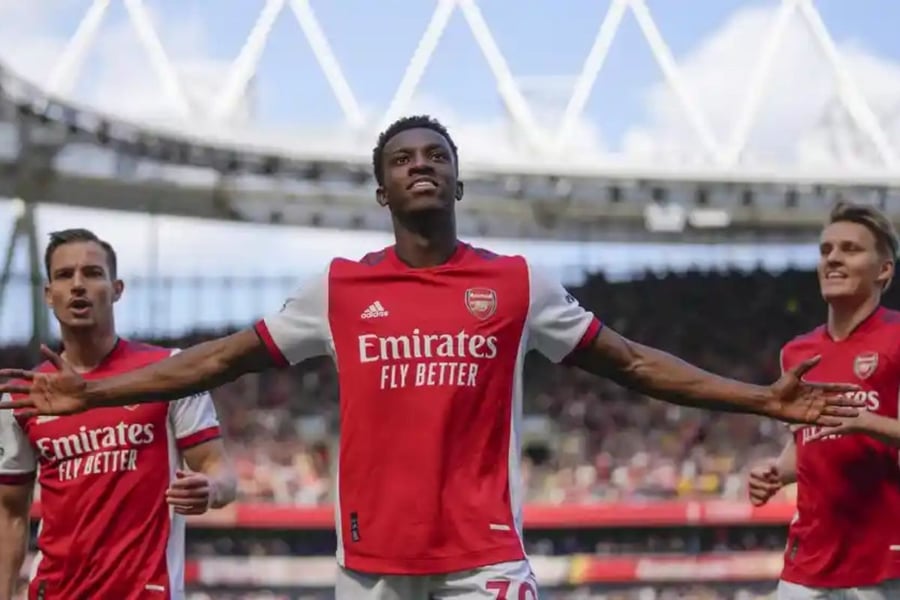 Eddie Nketiah's brace in Arsenal's 2-1 win against Leeds United as the Yorkshire club dropped into the relegation zone on Sunday.

While second-placed Manchester City waited for their chance to go three points clear of leaders Liverpool with a win against Newcastle later on Sunday, the focus in the day's early games was on the top four and the relegation battle.

Nketiah netted twice in the first 10 minutes at the Emirates Stadium as Mikel Arteta's side earned their fourth successive win.

Leeds had skipper Luke Ayling sent off and, although Diego Llorente got one back, it was too little, too late for Jesse Marsch's strugglers.

Fourth-placed Arsenal are four points clear of fifth-placed Tottenham, with three games left for both teams in the race to qualify for next season's Champions League via a top-four finish.

Tottenham's gritty 1-1 draw at Liverpool on Saturday had kept them in the hunt, but Arsenal will visit their north London rivals on Thursday knowing a win would guarantee they finish above Antonio Conte's men.

Arteta signed a three-year contract extension on Friday and he is on course to repay that faith by leading Arsenal to their first Champions League campaign since 2016-17.

Nketiah spent time on loan at Leeds earlier in his career, but the Arsenal forward showed no mercy to his old club.

In the fifth minute, Nketiah punished a poor touch from Illan Meslier, closing down the Leeds keeper and tapping into the empty net.

Nketiah hardly celebrated out of respect for Leeds, but he struck again five minutes later, this time meeting Gabriel Martinelli's cross with a fine finish from 12 yards.

A dismal day for Leeds took another turn for the worse in the 27th minute as Ayling was sent off after a VAR review of his crude lunge on Martinelli.

Llorente reduced the deficit with a smart finish from Leeds' first corner in the 66th minute, but Arsenal held on.

Leeds sit third bottom of the table due to having a worse goal difference than Burnley.