EPL: Rangnick's Man Utd Out Of Top 4 With Draw At Burnley 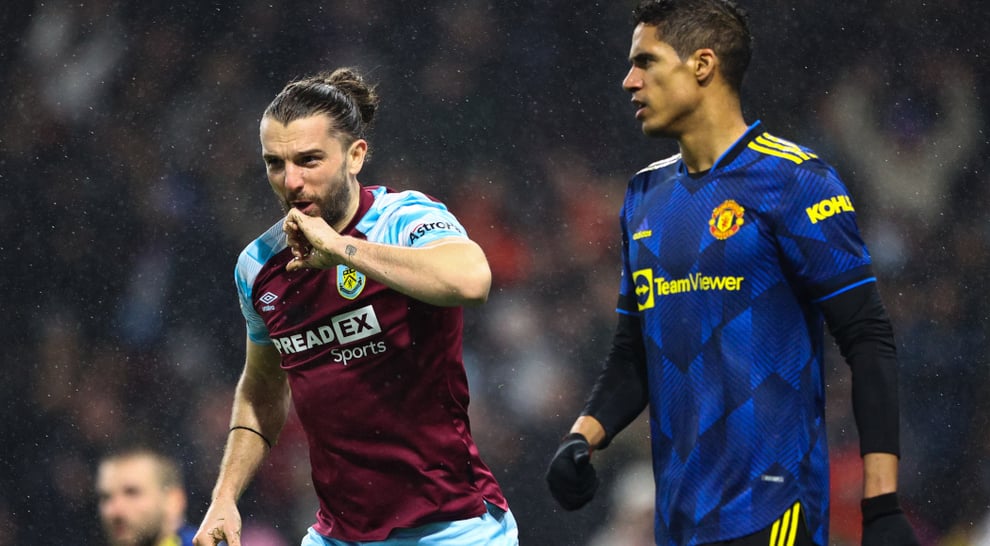 Manchester United was pushed off the Premier League's top four after being held 1-1 by bottom-table Burnley at Turf Moor on Tuesday.

With Cristiano Ronaldo left on the bench, United were made to pay for not making more of a dominant first 45 minutes after Paul Pogba put them in front.

Burnley roared back after the break and gave their survival hopes a boost when Jay Rodriguez levelled two minutes into the second half.

United's troubled season hit another bump in the road when they were dumped out of the FA Cup by Championship side Middlesbrough on penalties on Friday.

The lessons from that defeat were not learned as again Ralf Rangnick's men had more than enough chances to kill the game as a contest before half-time before being punished for a slack piece of defending.

For the first time, the German left a fit Ronaldo out of his starting line-up for a league match after the 37-year-old played the full 120 minutes on Friday.

However, United's first-half performance will add more fuel to the debate on whether they function better as a unit without the five-time Ballon d'Or winner.

The visitors had the ball in the net three times and missed a number of guilt-edged chances, but only had one goal to show for their dominance by half-time.

Raphael Varane thought he had scored his first United goal when he leapt to power home Bruno Fernandes' free-kick on 15 minutes.

But after a lengthy VAR review, the goal was disallowed for Harry Maguire interfering with Rodriguez from an offside position.

Three minutes later, United did deservedly lead when Pogba thundered in Luke Shaw's cross from the edge of the box.

Moments later Burnley captain Ben Mee turned Marcus Rashford's cross into his own net but was handed a reprieve by a harsh foul given against Pogba in the build-up.

Even with decisions going against them, Rangnick's men only had themselves to blame for not putting the game out of sight before the break.

Burnley had barely offered anything of note as an attacking force in the first half.

And the Burnley boss got his reward in a fast start to the second half.

Weghorst left Harry Maguire trailing and slipped in Rodriguez, who held off the United captain, to dink the ball beyond David De Gea.

After being a spectator for 45 minutes, De Gea was then called into action again to prevent Weghorst from completing the comeback with a powerful hit from outside the box.

Rangnick turned to Ronaldo for a goal 23 minutes from time, but it was Varane who came closest to a winner with an inventive backheel that Pope turned behind.

Burnley's 11th draw in 20 league games this season is not enough to move them off the foot of the table and the gap between the Clarets and safety stretched to four points on Tuesday thanks to Newcastle's 3-1 win over Everton.