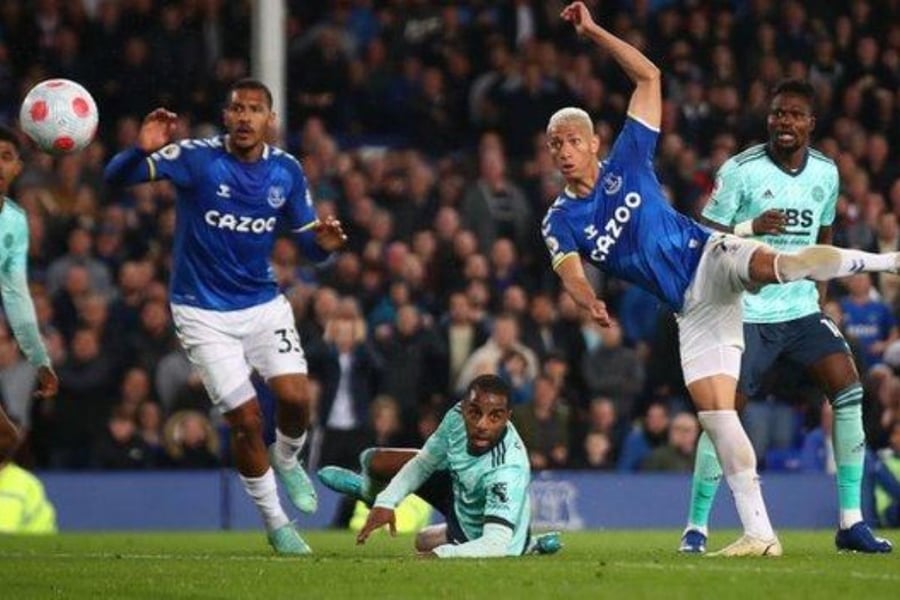 Brazilian striker Richarlison scored in second-half stoppage time to snatch a vital point for Everton in a 1-1 draw with Leicester City following a spirited Premier League encounter at Goodison Park on Wednesday.

The result leaves Everton, who meet Liverpool in the Merseyside derby on Sunday, four points above the relegation zone on 29 points, while Leicester are in ninth on 41 points.

Harvey Barnes put the visitors in front in the fifth minute, poking home a pass from James Maddison from close range as Everton struggled to find their feet.

With Leicester dominating possession, Everton failed to get a shot on target in the opening 45 minutes but they came out a different side in the second half, full of passion but still short on attacking quality.

Alex Iwobi tried to drag his side back into contention with some energetic running but all too often Everton's final ball let them down as Leicester maintained their composure amid some tough tackling.

James Maddison had a superb chance to seal the three points for the visitors in the 78th minute with Everton keeper Jordan Pickford briefly caught out of position but his effort to find the top corner was deflected away for a corner.

Richarlison finally forced a save from Kasper Schmeichel in the 67th minute and wasted a glorious chance to equalise when he was left completely unmarked for an 83rd-minute corner but flashed his header wide.

Redemption was at hand in the second minute of stoppage time as Dele Alli and Salomon Rondon combined to set up a chance for the Brazilian, and his scuffed shot found the back of the net to prompt wild celebrations from the home fans as their side bagged a precious point.

Everton captain Seamus Coleman praised his side's resilience as they followed up a win over Manchester United with a gritty home draw.

"I thought we were more aggressive in the second half, we showed character and had plenty of chances to equalise. It was a deserved point in the end," he told Sky Sports.

"We didn't get too high after beating United and we won't get too low about not beating Leicester. We're not taking it for granted, we just have to keep going.

"We are not in the position we want to be but we are where we are, we're fighting."