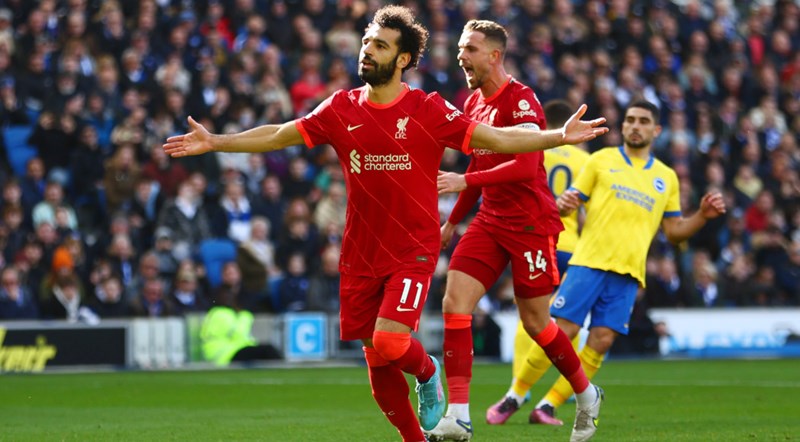 Jurgen Klopp faces an anxious wait over Mohamed Salah's fitness after Liverpool closed the gap on Premier League leaders Manchester City to three points with a 2-0 win against Brighton on Saturday.

Luis Diaz opened the scoring in the first half and Salah netted with a penalty after the interval at the Amex Stadium.

Klopp's side have won their last eight league games, keeping the pressure on City, with the champions playing at Crystal Palace on Monday.

Salah has reached 20 goals in a Premier League season for the fourth time, with his latest strike coming at just the right time amid his tense contract negotiations.

Klopp said on Friday it is up to Salah whether he signs a new deal, a claim that was followed by the Egypt forward's agent tweeting a series of laughing emojis just minutes later.

Salah's long-term value to Liverpool is immense, but of more immediate concern to Klopp will be the knock that saw him replaced by Diogo Jota soon after his first goal in four games.

With a testing trip to Arsenal looming on Wednesday followed by an FA Cup quarterfinal at Nottingham Forst, Klopp will hope his star makes a quick recovery.

"Something was not right. I think there was a situation where his foot got stretched. We'll have to see," Klopp said.

While City are in fine form, Liverpool's hot streak is equally impressive.

The Reds have scored 21 goals and conceded just twice in their winning run, while also keeping a third successive league clean sheet for the first time this term.

When Salah converted from the spot, it made Liverpool only the second club to score 2 000 goals in the Premier League, emulating Manchester United.

"It was expected to be a difficult game and I'm really happy with certain moments. We were really strong and scored a great goal," Klopp said.

"We had massive counter-attacks that we didn't use but it's fine. I'm really not overly critical with the boys.

"Consistency is the most important thing, but it's also the most difficult as well."

On the title race, Klopp added: "It's always the same, you expect Manchester City to win every game when you watch them play.

"The only thing we can do is as win as many football games as possible. We're ready, we don't need to call it a title race, we just want to win games."

Liverpool, chasing an unprecedented quadruple, suffered only their third defeat this season against Inter Milan in the Champions League last-16 second leg in midweek.

But Klopp insisted his players are such bad losers that they were certain to mount an immediate response to the Inter loss, which didn't stop them progressing to the quarterfinals on aggregate in any case.