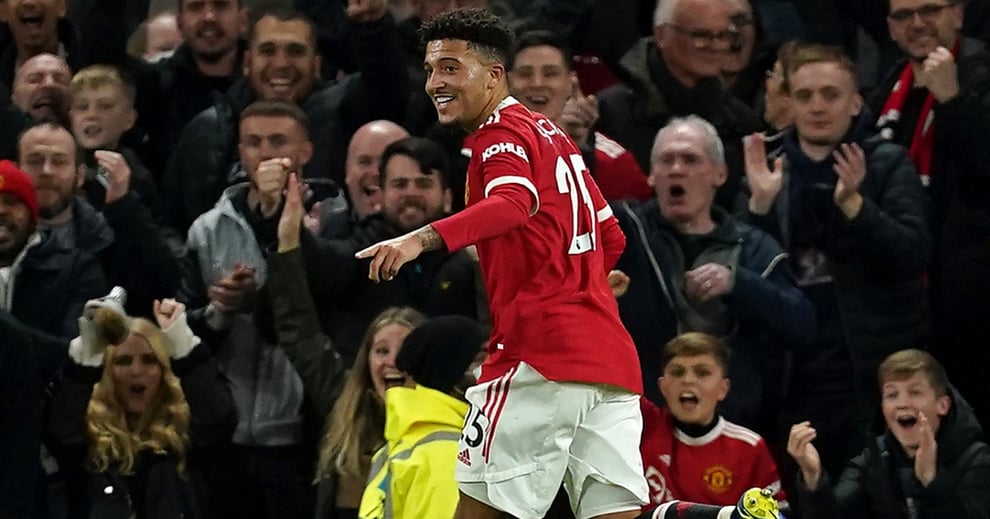 Manchester United breezed to a 3-1 win over lowly Burnley as Jadon Sancho's first Old Trafford goal on Thursday helps to seal three points to strengthen their push for a Premier League top-four finish.

Another individual who was honoured on the night was former United coach Sir Alex Ferguson, who clocked 80 on Thursday.

The defeat leaves Burnley mired in relegation trouble, third from the bottom of the table with just a single Premier League win all season.

The Red Devils are now four points behind fourth-placed Arsenal with a game in hand after interim manager Rangnick shook up his team following a disappointing draw at Newcastle.

Rangnick, still unbeaten since taking over from the sacked Ole Gunnar Solskjaer, made six changes, shuffling his defence and starting Jadon Sancho and Edinson Cavani in the attack.

Bruno Fernandes was suspended after picking up a fifth yellow card of the league season.

Burnley have suffered a number of postponements as a result of coronavirus and a snow-bound pitch, and the COVID-19 again disrupted Dyche's plans at Old Trafford.

Dyche, whose side had not played since 12 December, confirmed before the game that Josh Brownhill, Nick Pope, Jay Rodriguez and Kevin Long had missed out after testing positive for the virus.

Both teams made a bright start to the game, with Burnley's Chris Wood heading over from close range and Ronaldo side-footing over with just the goalkeeper to beat after a fine pass from the recalled Luke Shaw.

United opened the scoring in the eighth minute when Mason Greenwood cut the ball back to the edge of the box, where Ronaldo's first touch fell for McTominay, who hit a sweet right-footed shot past Wayne Hennessey.

The home side extended their advantage in the 27th minute in front of former manager Ferguson, who was at the helm the last time they won the Premier League, in 2013.

Sancho was freed on the left by Shaw and the former Borussia Dortmund player cut inside onto his right foot before hitting a low strike that nestled in the corner via a slight touch from Burnley captain Mee.

A superb McTominay effort was met by a similarly impressive stop by the flying Hennessey, who tipped the strike onto a post only for Ronaldo to react by flicking the loose ball into an empty net with the outside of his right boot.

The goal looked to have wrapped up victory for United but their porous defence conceded again as Lennon produced a clinical finish to beat David de Gea after a fine driving run.

The second half started at a more sedate pace but the confident McTominay again tried his luck from range shortly after the hour mark, forcing Hennessey to tip over.

United were largely in control for the rest of the match as they ended 2021 on a high despite a couple of late scares.