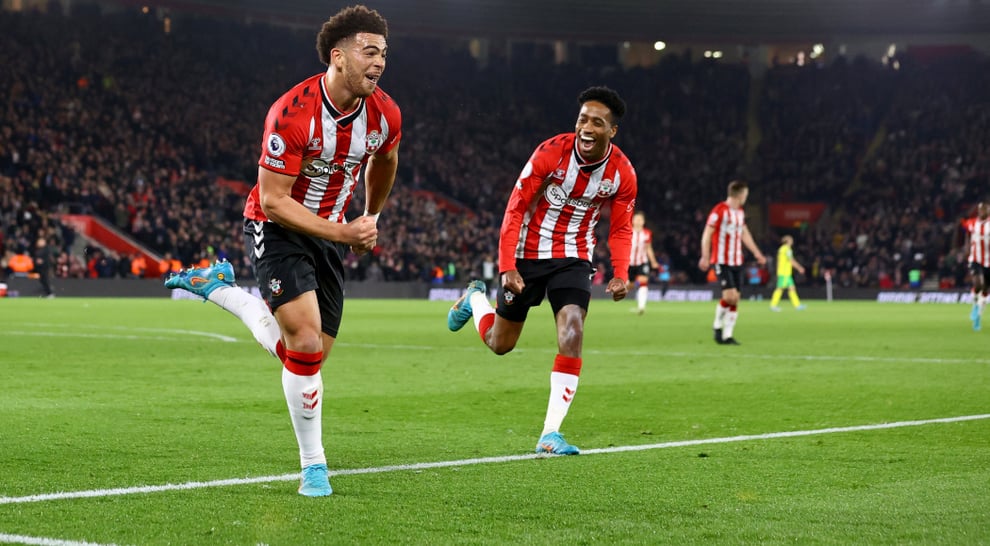 Southampton has sunk Norwich deeper into relegation trouble as the Premier League's bottom club slumped to a 2-0 defeat at St Mary's on Friday.

Che Adams rewarded Southampton's first-half dominance with the opener before Oriol Romeu finished off the Canaries with his first goal for the club since October 2020.

Norwich have lost nine of their 12 league games, leaving them stuck five points from safety.

Only three teams have avoided relegation from the Premier League after losing as many as Norwich's 17 defeats by this stage of the season.

Having played more games than any of the teams directly above them, it is looking increasingly unlikely that Dean Smith's side will avoid relegation to the Championship.

Southampton have lost just once in 12 games in all competitions and sit comfortably in mid-table.

Norwich have scored six goals fewer than any other side in the division this season, while only Leeds have a worse defensive record.

It didn't take long for Southampton to start exposing their flaws.

As Southampton's pressure mounted, Gunn adjusted well to get his body behind Stuart Armstrong's deflected effort.

The over-worked Gunn made an even better save to keep out Elyounoussi's close-range volley after Broja bundled James Ward-Prowse's cross towards the winger.

Adams headed a good chance wide from Ward-Prowse's corner, but the Scotland striker made amends in the 36th minute.

Tino Livramento's cross caused panic in the Norwich defence and when Gunn failed to handle the delivery, Adams stumbled but managed to hook his shot over the keeper and Max Aarons.

It was an ugly strike but Adams wasn't complaining as he celebrated his fourth goal in seven appearances in 2022.

Norwich had lost 50 of the last 51 Premier League games in which they trailed at the break.

There was no change to the pattern in the second half as Southampton flooded forward.

Armstrong and Ward-Prowse were both denied by Gunn, who also palmed away Kyle Walker-Peters' powerful volley.

Out of the blue, Norwich fashioned a chance to snatch an equaliser but Grant Hanley headed wide from Pierre Lees-Melou's cross.

Lees-Melou whipped over another inswinging cross that whistled just wide without any of his teammates applying the finishing touch.

Just as Norwich finally had hope, Romeu killed them off in the 88th minute.

Ward-Prowse's corner was headed out only as far as Romeu, who smashed a half-volley past Gunn from the edge of the area.