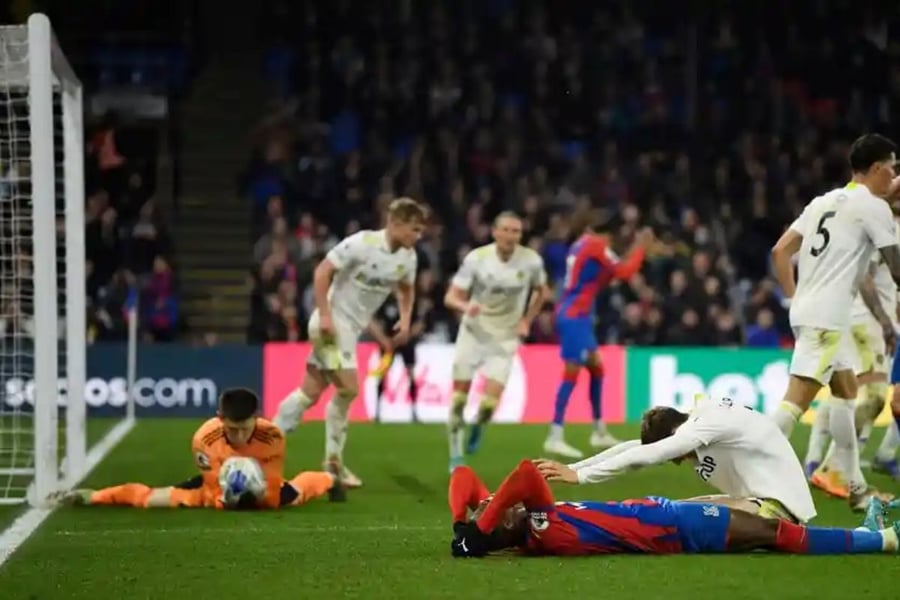 Leeds United held on for a 0-0 draw at Crystal Palace that did little to ease their fears of being dragged deeper into the Premier League relegation battle on Monday.

Jesse Marsch's side survived a second-half barrage from a Palace team inspired by Wilfried Zaha after he was accused of diving by the visitors.

Leeds are five points clear of the relegation zone, but third-bottom Everton have a game in hand to close the gap to two points.

With Leeds' next three games coming against Manchester City, Arsenal and Chelsea, there could yet be a nerve-jangling conclusion to the season for the Yorkshire club.

But despite that solid run, Burnley's second successive win, against Wolves on Sunday, has lifted them out of the relegation zone above Everton, in the process dragging Leeds into the scrap for survival.

"It wasn't our best night, but it's a recipe for not losing and finding a way to pick up points. We will take the positives," Marsch said.

"We need to find ways of being a bit more dangerous, but a clean sheet and a draw is a big positive.

"The (relegation) pressure was always going to be big no matter what."

None of those previous encounters can have been quite so crucial to Marsch as this one as Leeds tried to climb away from the relegation dogfight.

England midfielder Kalvin Phillips was making his first Leeds start for nearly five months after a hamstring injury, but at times the frenetic tempo left him struggling to keep up.

Palace dominated the early stages and Mateta missed another good chance as he stretched to shin Jordan Ayew's cross wide from close-range.

Zaha's theatrical tumbles raised the temperature on the touchline as Marsch took issue with the Ivorian, who then shoved Raphinha in the face to make the atmosphere even more feisty.

The bad blood spilt over into the second half as Daniel James was booked for a crude foul on Joel Ward that sparked another melee.

Zaha appealed for a penalty after Luke Ayling's challenge sent him sprawling, but his protest was waved away.

Undeterred, Zaha took the attack to Leeds again as he cut inside the area for a shot that Meslier held well.

Gallagher smashed a half-volley just over from the edge of the area before Meslier twice saved with his legs from a pair of Zaha strikes.