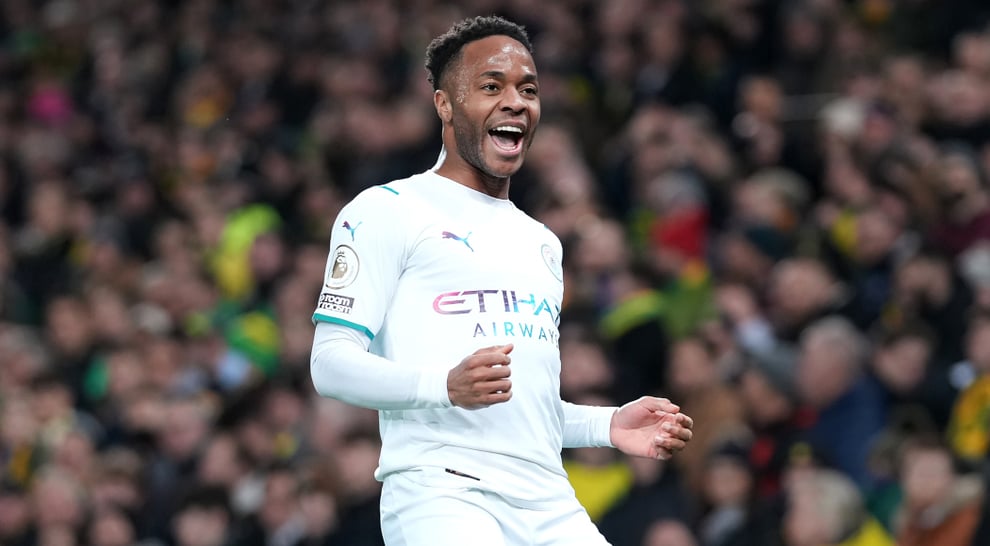 Raheem Sterling's hat-trick in a 4-0 demolition of Norwich retains 12 points gap for Premier League leader, Manchester City, on the standings on Saturday as Pep Guardiola's side left no room for error.

Sterling put City ahead in the first half at Carrow Road and Phil Foden doubled the champions' lead early in the second period.

"For his confidence, it will be massive, the first goal is brilliant when Raheem executes without thinking he is excellent," Guardiola said.

"I'm so happy for him because strikers need to score for confidence for the next games."

Guardiola's side are unbeaten in their last 15 league games, with 14 wins in that streak keeping them firmly on course to retain the title.

"All the time it looks easy but it is difficult to do our job and we did it again," Guardiola said.

Second-placed Liverpool can close the gap to nine points if they win at struggling Burnley on Sunday in the first of their two games in hand on City.

Liverpool showed no signs of giving up their pursuit, but City have won 18 of their last 20 matches in all competitions.

"We need a lot of points. We know what rival we have, the closest one is Liverpool. They won't drop many points for the quality they have," Guardiola said.

"It's the best squad they have in the last decade. We'll have to win a lot of games."

On their current imperious form, reaching that target might not be much of a problem for the City.

With an eye on Tuesday's Champions League last 16 first leg at Sporting Lisbon, Guardiola made five changes from the midweek win over Brentford, with Kevin De Bruyne and Joao Cancelo among the players rested.

Bernardo Silva was inches away from giving City the perfect start when his sixth-minute strike hit the post and bounced back to Norwich keeper Angus Gunn.