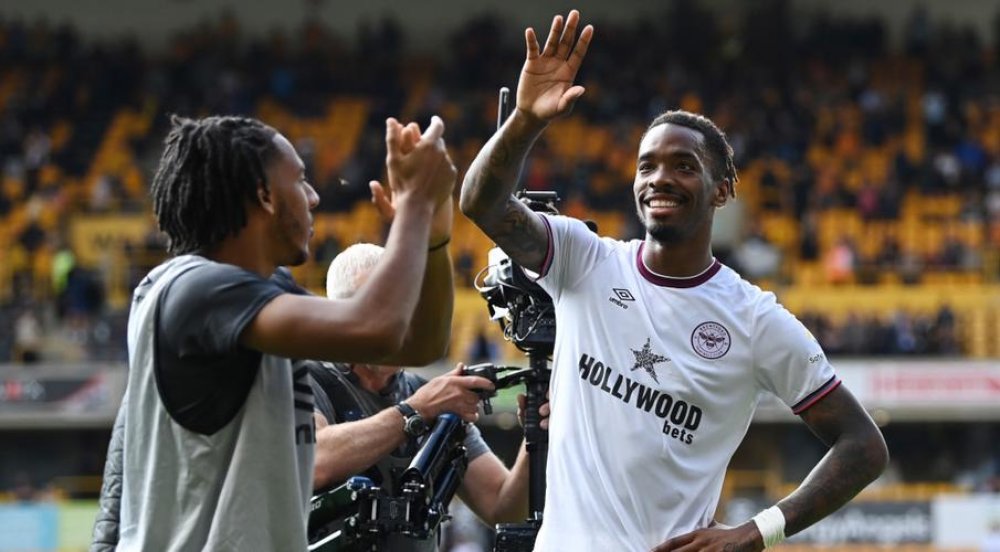 Newbie Brentford claimed their first away victory in the Premier League with a 2-0 scoreline over Wolverhampton Wanderers on Saturday, keeping a clean sheet despite going down to 10 men midway through the second half.

The victory is promoted Brentford's second of the season after beating Arsenal in an opening day match. It is also the club's first away win in the top flight in 74 years as Thomas Frank's side provisionally moved up to ninth in the standings.

Livewire striker Ivan Toney scored and grabbed an assist in a busy first half in which he also had two goals disallowed, but the visitors were forced to defend for the last half hour when Shandon Baptiste was sent off for a second yellow card.

"We did well (in the) first half and could have scored more, but the second half showed the character we've got in the dressing room," Toney said.

"In the Premier League, you have to be deadly when you get the opportunity. I think we deserved the three points in the end."

Brentford earned a first-half penalty when Wolves wingback Marcal grabbed Toney in the box during a set-piece and brought him down, with the striker stepping up and sending Jose Sa the wrong way from the spot to give the away side the lead.

Toney then turned provider for Bryan Mbeumo, shrugging off a tackle in his run down the left channel before crossing to his strike partner at the far post and the unmarked Frenchman made no mistake with a tap in for his first Premier League goal.

Brentford were reduced to 10 when Baptiste received a second booking after losing possession and hauling Trincao down in panic, leaving manager Frank fuming on the sidelines as he was about to make a substitution.

But Brentford held on as Bruno Lage's Wolves side, who had numerous shots on goal but not one on target, continue to seek their first home win of the season.

"These players are amazing and they keep... surprising me isn't the word, but impressing me," Frank said.

"It was a very impressive, brave performance. In the second half we were down to 10 men but we defended with our heart and soul. We gave only one big chance away and that's very impressive."