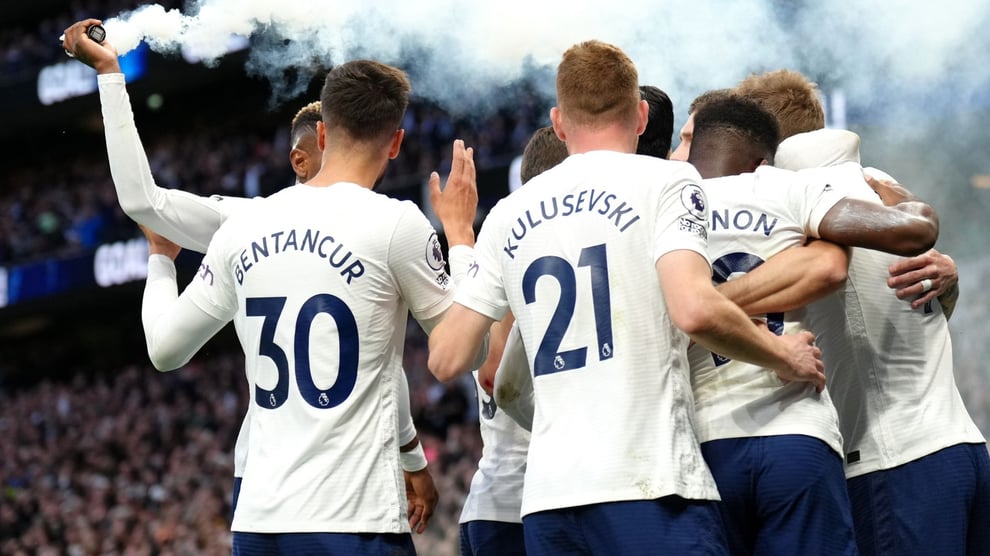 Harry Kane, Son Heung-Min were on target for Tottenham Hotspur in a 3-0 demolition of Arsenal in the North London derby on Thursday to end Mikel Arteta's men four games winning streak.

The victory for Tottenham put them 1 point behind Arsenal in the race for a top-four finish and a Champions League place but it was a massacre down the lane.

Kane opened the scoring from the penalty spot in the 22nd before Arsenal had Rob Holding sent off for a second yellow card 10 minutes later, both for clumsy fouls on Son Heung-min.

Kane's diving header made it 2-0 in the 37th minute to send Tottenham's fans into delirium.

The volume went up another notch immediately after halftime when Son fired a shot past Aaron Ramsdale for his 21st league goal of the season to kill off any hope of an Arsenal fightback.

Tottenham could even have won by more yet despite the celebrations from the home fans they remain fifth and Arsenal are still in the driving seat in the battle for fourth place.

But the gap between them is now only one point with both sides having two games remaining and Tottenham also boast a far superior goal difference."We still have two games to go and we have put the pressure on them. We have to focus on ourselves. We play early on Sunday so we need to get a result and see what happens," Kane, who extended his record goal tally in the north London derby to 13 in 17 games, told Sky Sports.

"We can only control our games. We did our job tonight. We won't get ahead of ourselves.

"Tonight was special but our ultimate goal is to get fourth place and we still have work to do."

Arsenal face Newcastle United away and Everton at home while Tottenham host Burnley and finish at relegated Norwich City.

With so much riding on the derby and the atmosphere electric, the opening exchanges were unsurprisingly frenetic with neither side able to settle into any kind of rhythm.

But that all changed when Dejan Kulusevski directed a cross towards Son and he fell under challenge from Cedric Soares and referee Paul Tierney pointed to the spot.

There was only going to be one winner as Kane stepped up to plant his spot kick low into the corner.

Arsenal, who had won their last four games, were rattled and Kane was denied a second by desperate blocks from Takehiro Tomiyasu and Soares.

Holding, who had already been booked for wrestling Son, then cynically blocked off the South Korean to earn a red card that left manager Mikel Arteta shaking his head in disbelief.

Things soon got even worse for Arsenal as Son's corner was met by Rodrigo Bentancur whose header was diverted in by a diving Kane at the far post.

Kane was already the highest scorer in north London derbies and he now has 13 goals in 17 matches.

Eddie Nketiah nearly gave Arsenal a lifeline before halftime when his curled effort forced Hugo Lloris to tip over.

But Arsenal could not cope with Son and Kane. The second half had barely begun when Kane tried to wriggle through and the ball broke for Son to calmly find the corner.

Ramsdale made a superb save to keep out Emerson Royal's header and Son missed an open goal before being substituted to a rapturous ovation from the Tottenham fans.

Martin Odegaard forced Lloris into a fine save late on but by that time most of the Arsenal fans had seen enough and were on their way home.