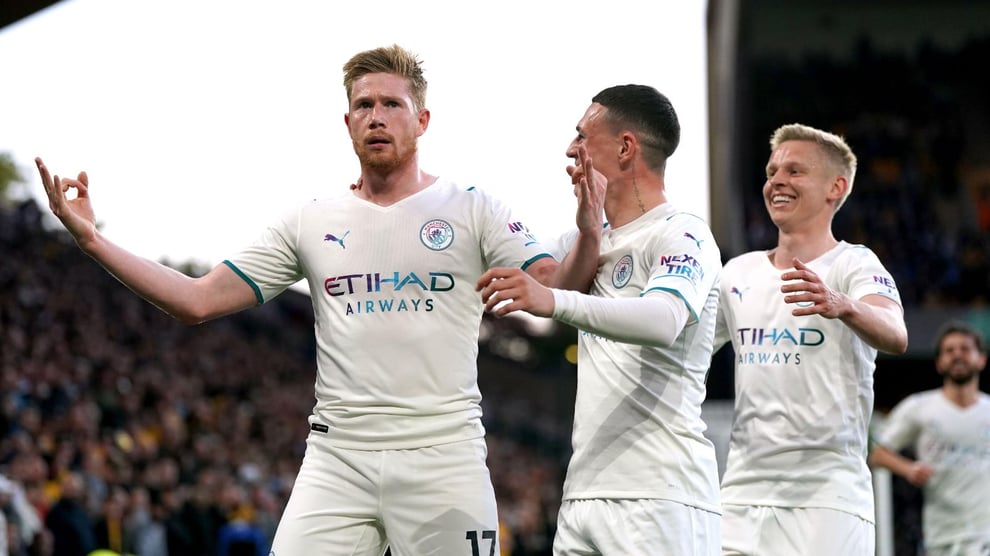 Belgian maestro Kevin De Bruyne scored four goals in a world-class performance for Manchester City to thrash Wolves 5-1 and move three points clear at the top of the Premier League on Wednesday.

Man City had seen title contender Liverpool go level on points with them after a 2-1 win at Aston Villa on Tuesday.

After De Bruyne put City ahead in the seventh minute from Bernardo Silva's pass, the leaders were briefly stunned by Leander Dendoncker's equaliser four minutes later.

But De Bruyne extinguished the Wolves' hopes of a shocking win as he completed his hat-trick with two more lethal finishes in the 16th and 24th minutes.

He bagged his fourth goal from close range in the 60th minute and Raheem Sterling put the seal on the demolition with an 85th-minute tap-in.

"He has the ability to create the special things. He has to score goals and this season is the most prolific he has had since we are together."

If City can win at West Ham on Sunday, they will climb six points clear of Liverpool before Jurgen Klopp's quadruple-chasing team next play in the league at Southampton on Tuesday.

City's second goal spree in four days after the 5-0 rout of Newcastle on Sunday also gives them an important seven-goal advantage over Liverpool in the goal difference column.

"If we win these games we will be champions. Now recover the players and the next final for us is against West Ham," Guardiola said.

Their latest win was even more impressive given City are without injured defenders Ruben Dias, John Stones and Kyle Walker for the rest of the season, with Aymeric Laporte limping off in the second half at Molineux.

While Liverpool have maintained a blistering pace in pursuit of City since January, Guardiola's team have been up to the challenge.

After drawing with Liverpool on April 10, City have won five successive league games, scoring 22 times and conceding only twice.