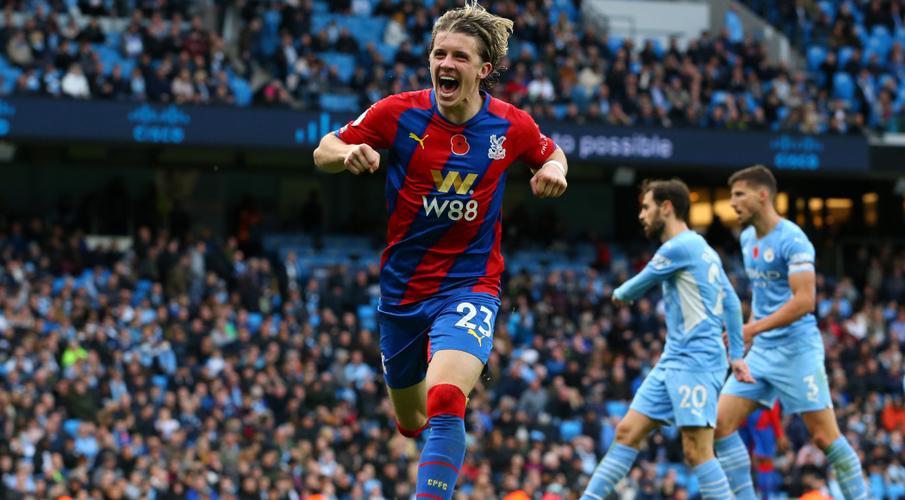 Crystal Palace's Wilfried Zaha and Conor Gallagher scored a goal each to inflict a shock 2-0 home defeat on champions Manchester City in the Premier League on Saturday.

The result ended Palace's run of four successive draws and gave them only their second win of the season. For City, it was their second defeat of the week following their League Cup loss to West Ham United.

Wilfred Zaha has now scored 50 Premier League goals. He is the first Crystal Palace player to achieve this feat in England’s top-flight.

"They have good players. I knew it would be a real tough game. I saw the Brighton and Arsenal games. I knew how difficult they would be. They showed it today," said City manager Pep Guardiola, who was taking charge of his 200th Premier League game.

Palace took the lead in the sixth minute when Zaha's scuffed left-footed shot found its way past Ederson after Aymeric Laporte had been caught in possession by Gallagher.

The visitors pressed furiously in the opening exchanges as City's midfield were allowed little time on the ball, leading to a number of stray passes and few clear chances in front of goal.

Laporte's dismal afternoon came to a premature end in first-half stoppage time when he was shown a straight red card for bringing down Zaha and denying the Ivory Coast international a goal-scoring opportunity.

"It was about getting in their faces and not letting them play. We know how good they are, we wanted to show them what we could do," said Zaha, who was involved in an altercation with opposition players after the halftime whistle.

Guardiola added: "Could be yellow card, could be red it depends on the decision of the boss, the referee.. unfortunately today, many, many things went wrong and we lost the game."

City found their stride after the break and Gabriel Jesus had the ball in the net on the hour-mark, only for it to be chalked off after Phil Foden was found to have been offside in the build-up.

Guardiola sent on Riyad Mahrez and Raheem Sterling in search of an equaliser, but Gallagher put the game beyond doubt in the 88th minute with an excellent finish following a swift Palace counter-attack.

"It was brilliant honestly. What a feeling to finally get a bit of luck on our side even though we deserved it. To get three points against a team like that away is a great feeling," said Gallagher.

Zaha put the victory down to the influence of manager Patrick Vieira.

"He knows what he is talking about and we have all seen him do it. It's surreal because he was an amazing player. Every player is buying into it and slowly the results will come," the winger said.

Palace climbed to 13th in the table with 12 points from 10 games. City are third on 20 points, five behind leaders Chelsea